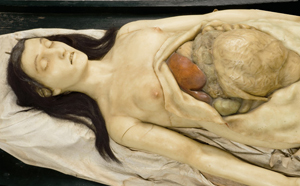 'Come and see a cabinet filled with hairy, infected groins, each one disfigured with its own strain of oozing canker,' begins the press release. Not the official press release, of course, but the one we're mentally composing as we tour the Wellcome Collection's new exhibition. The incongruously named 'Exquisite Bodies' is anchored around a remarkable congeries of wax models. Many are anatomical replicas formerly used as teaching aids for surgeons and midwives. Others, including the cupboard of pustulating genitals, were used as a warning to the public about the dangers of promiscuity. Back in our imaginary press release, we'd note that the exhibition was originally conceived by Gunther Von Hagens, Tim Burton and Madame Tussauds, brainstorming in a VD clinic staffed by the cast of Psychoville. Needless to say, it's the best exhibition you'll see all summer.

The real press release styles the show as 'the curious and grotesque story of the anatomical model'. As so often with the Wellcome Collection, we're treated to a crooked twig from a forgotten branch of the great tree of medical history. The narrative takes us from the late 18th century to the early 20th, a journey that begins with the anatomical surrogates put to serious scientific and pedagogical use, and ends in a smutty freakshow for prurient Victorians. It's an utterly successful exhibition. If you just want to turn up and gawp at the macabre, you'll find plenty of twisted eye candy. If you want to take time and read all the panels, you'll find an absorbing history filled with curious characters such as Joseph Towne, anatomical model maker to Guy's Hospital for over 50 years. Gruesomely glorious stuff and a must-see for anyone without syphilis.