Get A Bike While You Still Can 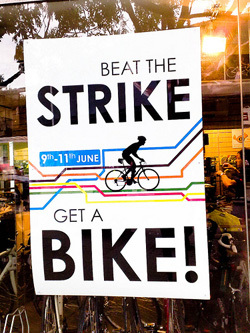 As tired commuters make the switch from London's tubes and buses to shiny new bicycles they may find there is not much to choose from in the bike shops. Bike manufacturers across Europe are struggling to keep up with demand. Yet, this rise in cycling would not have been hard to foresee.

The mayor and TfL have long had a goal of a 400% increase in cycling by 2025. As a result, numerous advertising campaigns have encouraged people to take up the bike as a preferred way of travel. Additionally the bike to work scheme, which allows workers to save money on the purchase of a new bike, has been highly successful. Some shops have reported as much as 50% of their sales coming through this scheme. The numerous cycling events going on in the capital this summer, such as the Dunwich Dynamo and Bike Week, may also be contributing to the increase.

However, let's not be too quick to pat the Mayor on the back. At least three other events may have contributed. The first is the recent warm weather which always encourages bike sales. The second is the Tour de France which converts its own share of armchair cycling enthusiasts each year. Finally, there were those pesky tube strikes, during which many Londoners were forced to rethink their chosen mode of transport. Those that switched to bike may have chosen to stick to it.

So have London's tubes and buses finally got so bad that a switch to cycling has become irresistible, or has the capital finally become more cyclist friendly? Or both? Either way, cyclist converts may find themselves with a bit of a wait on their hands as bike shops restock on the favoured road bikes and hybrids.

By Andreas Kambanis. Read more of Andreas' thoughts on cycling in London over on his blog.