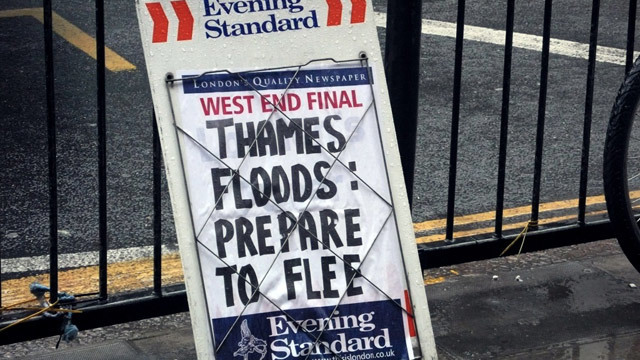 Pulitzer-winning journalism by the Standard. Photo by Nick Farnhill

Back in March, after a change in both ownership and editor, the Evening Standard dedicated a whole editorial to its brave new vision of the capital, promising to be a "life-affirming, aspirational newspaper". While readers haven't seen much evidence of this as yet, the paper is signalling a sea change in style with a bold new advertising campaign: they're apologising to each and every Londoner for years of shoddiness.

As outlined in Brand Republic, the Standard have launched a three-week campaign that will attempt to bury forever the critical and negative approach it became known for under former editor Veronica Wadley. The billboard ads are stark, with bold text and short mea culpas that each begin with the word "Sorry" followed by a series of self-flagellating phrases: "Sorry for being complacent" is one example. In another, the paper begs forgiveness for "losing touch" with the capital's residents. They've certainly lost touch with Londoners' fingertips — a rush-hour Tube carriage is full of commuters clutching London Lite or thelondonpaper, with just the occasional stray Standard.

The ad campaign is leading up to the launch of a new-look paper next Monday, May 11th, which will embody editor Geordie Grieg's new mission-statement: to offer a "fundamentally optimistic view of life". Will it catch on with Londoners who favour the freesheets on their ride home? Well, saying sorry may be a good start, but there's some irony in the timing of the Standard's new happy-go-lucky attitude coming at a time when, from the economy to crime to poisoned politics and predicted pandemics, the wolves of bad news are gnashing at the gate. The paper will have to offer something truly special if it's to compete in an already tough marketplace.