Changes At The Helm Of The Evening Standard 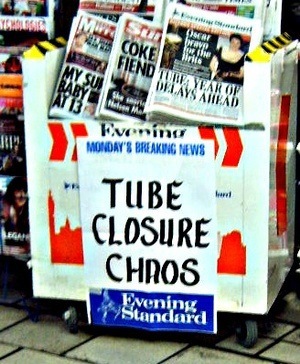 Evening Standard - Never Knowingly Understating
Ah, the Evening Standard. It's so very 'London', isn't it? As 'London' as... a red bus stuck in its depot, the Standard's paper sellers love to shout on the street and generally get in everyone's way with their little stalls.

Following on from the announcement last month that the Russians are not only coming, but also buying the famous London title, we are now beginning to see some of the fall-out, and not just in our imagination.

Now then. Veronica Wadley has been Editor at the Standard for seven - long - years, but has apparently already been sent packing on a speeding train to Siberia. Her stewardship at the Standard was informed by her background at the Daily Mail, which predictably meant the paper leant in certain political directions, developing a famously tetchy relationship with Ken Livingstone. No surprise then, that the paper was a rabid champion of Boris Johnson in May's election, leading to it being renamed the 'London Evening Boris'. The paper has been understandably quite smug ever since.

So what does the new editor bring? Well, for one thing, he brings a funny name - Geordie Greig - which we like. He will also bring a sense of Style (yes, spot that capital 'S') as he's been editor of Tatler for the last decade - something we would expect from a man who calls one of his children "Octavia".

We guess that on Day 1 he'll be bumping off the Standard's in-house Fashion Editor before anyone gets to sit down at the early morning team meeting.

Image from Annie Mole's Flickrstream under the Creative Commons license