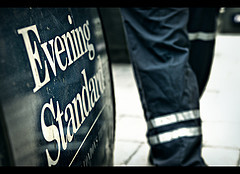 Image by Joep R.
A "cheerleader" for London. A "life-affirming, aspirational newspaper". Not words you'd normally use to describe the Evening Standard, which during its years as the plaything of Associated Newspapers would regularly splash with sub-Mail shockers about illegal Moroccan migrants and the danger they pose to Londoners' house prices.

Yet the Russian-owned paper, under new editor Geordie Grieg (it stops being funny the third or fourth time), has indicated that the days of doom-chattering and fear-percolating are in the past. In a brash editorial on page 2 of today's edition, he declared the paper would be the "capital's champion", standing up for Londoners, "whoever they are, whatever their background, wherever they were born", and offering them a "fundamentally optimistic view of life".

Clearly trying to avoid any comparison with the Murdoch-run press, Grieg also made numerous references to the Standard's editorial independence under new owner Alexander Lebedev, stating that the paper's direction "shall be entirely in the hands of the editor and his team". Protesting a little too much, perhaps?

In any case, we look forward to seeing what comes next. The Standard has struggled against the encroachment from freesheets and the Web, and the previous owners showed little desire nor ability to maneuver the well-storied title into a better market position, letting it slide into a poor parody of its stablemate. How the paper's new regime of fundamental optimism manifests itself will become apparent in the weeks and months ahead. Although, if we were Brian Sewell, we'd probably start clearing our desk already.