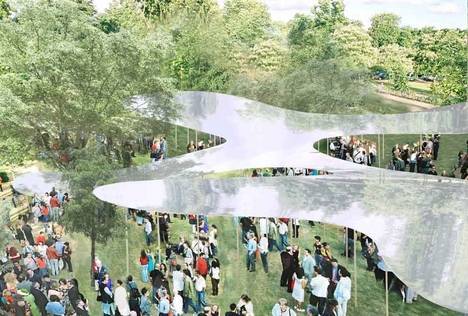 Image from Building Design
Wow, that was quick. Mere weeks after they were announced as the designers of this year's Serpentine Pavilion, Japanese firm Saana have revealed the renderings of the finished structure.

Looking a little like a skatepark used by the Silver Surfer to practise ollies and kickflips, the design reveals a metal-roofed aluminium canopy, high above the ground, with a reflective surface on both sides. The "undulating" shape will snake through the site's trees, and a lack of walls will allow unbroken views across Kensington Garden's open space: the humble, unhurried design seems a world away from Frank Gehry's excitable, ADD-ridden design from last year.

Such minimalism is appropriate for the times, and with the capital's job market looking ever grim, this subtle design, which promises to "melt into the surroundings" and change appearance with the weather, could receive record numbers of underemployed visitors trying to escape the summertime blues.

The Pavilion will be officially opened in July.