The 2008 Serpentine Pavilion: In Pictures 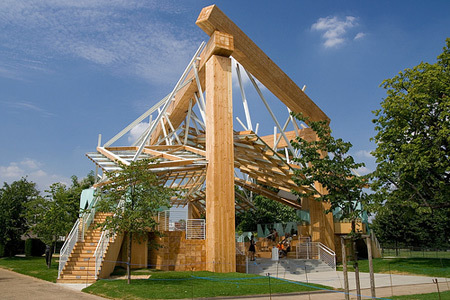 Depending on which side of Prince Charles you stand, it's either to our shame or credit that London has yet to welcome a Frank Gehry building. No longer: the architect's first project here, this year's Serpentine pavilion, opened last week.

Gehry brings a wealth of controversies and preconceptions. To fans he's an iconoclast able to redefine entire cities (his Guggenheim museum spawned "the Bilbao effect") and design breathtaking yet functionally adept buildings on time and on budget. To critics he's a snake oil salesman who regurgitates the same old material time and again, irrespective of local environs, with a habit of using inappropriate materials: the celebrated titanium curves of his Disney Concert Hall in Los Angeles were less popular after they reflected rays of superheated sunlight onto the sidewalk.

London's first Gehry, engineered by Arup, embodies both sides of the coin. His pavilion is seemingly in some state of internal prolapse, with steel columns and timber beams crying out for attention. The structure (based on Leonardo da Vinci's design for a catapult) thrusts and claws elegantly, a cacophony of energy set off against the Serpentine Gallery's sober front. Yet for all the bustle, it's little more than a covered walkway (or "urban street" in the architect's lingo), and as a result distinctly less engaging than the embracing auditorium we were treated to last year. Gehry's design is like a shrieking man gesticulating wildly yet doing little more than reading the alphabet cover to cover.

For a country rarely enamoured by the "carbunkles" of modern architecture, the Serpentine Pavilion is an ideal project, allowing us to gawp at soaring ambition before tearing it down. We can enjoy Gehry's manic form at short hand, but after three months, Londoners may not be entirely sad to see it go. That said, it's possible the pavilion - plus many prior efforts - may see the light of day in London again.

The Pavilion will be at the Serpentine Gallery, Hyde Park, until October 19th, and will host all manner of events between now and then