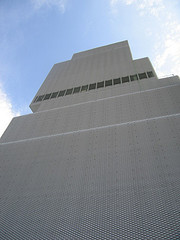 Sanaa's New Museum in New York, by bee721
This year's Serpentine Pavilion will be designed by Japanese firm Sanaa, it was revealed yesterday. The Tokyo-based outfit, comprised of architects Kazuyo Sejima and Ryue Nishizawa, will design the pavilion in the grounds of the Serpentine Gallery; it should be completed in June or July and will last around three months. Engineering and structural support will come from SAPS and Arup.

Though the pair may not yet be household names, they boast an impressive resume. Perhaps their most significant work, and certainly their best known, is the New Museum of Art in New York's Bowery district, a light, deceptively clever work with a beautifully distinct profile that resembles a series of stacked boxes. At least one architectural critic considers it the most important new building in Manhattan in years, one that "demonstrates the power of the understatement". Hopefully the firm can bring a similarly cool approach to the Serpentine space, which after last year's scattergun Gehry requires perhaps a simpler, less bombastic touch to reflect our current global preoccupations.

The pavilion will be the second Japanese entry into the annual project, after Toyo Ito's 2002 project, which the great architect designed in conjunction with Cecil Balmond. Jonathan Glancey, among others, considers that pavilion the best in the series' history, and given that Ito was the man responsible for training Sejima and Nishizawa, we could be set for something quite special come summer.

Is it too much to hope that the clean minimalism Sanaa offers could take root in the post-'08 crash architectural wilderness, if only to offer an alternative to the glittering paeans to capitalism that garland the City? Perhaps, though this champagne socialist can but dream.