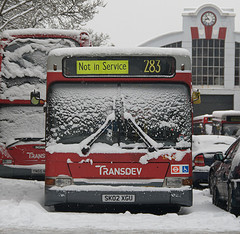 Image courtesy of nuttyxander via the Londonist Flickr pool
At the time we threw our hands in the air and huffed a lot, and now a report confirms that the agencies supposed to deal with bad weather in London really didn't have a clue what the others were doing. Valerie Shawcross, who chaired the London Assembly investigation, says what's needed is something similar to the emergency response plan that kicks in after, say, a terrorist attack (apparently the snow didn't "constitute a level of emergency" high enough to trigger it).

What intrigues us is that even though many of the respondees to the committee cite these emergency plans as an example of how London is capable of getting its arse in gear, not all of the organisations boasting about it seem to have been able to, oh, we don't know, transfer some of the knowledge and common sense from their emergency training into another highly unusual situation. Which fule, for example, decided to wait until 6am to tell Boris Johnson that buses were off the roads?

TfL also gets a real kicking from the boroughs. Some complained about having to get travel information from TfL's website, and Enfield can't seem to stop putting the boot in (you can get the report from the BBC's website, it's quite funny). Shawcross has a personal whinge at the Mayor too, accusing him of not showing any concern, before or after. Clearly everyone's learned their lessons and have resolved to communicate better in future, then. Sigh.

And the outcome of all the soul searching? Why, another review of course! The London Resilience Local Authority Panel and TfL are going to "review the events" of the snowfall (didn't the LA committee just do that?) with a "view to identifying any lessons that might be learned". Because bureaucracy works, kids. Oh no, wait...