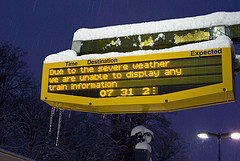 Image by kind permission of Tim*A
When the first giddy rush of all that snow had subsided, and we were back inside warming our toes after all the frolicking, we sat down to play the game of London Snow Madness.

You know the one: spotting examples of over-reaction, over-cautiousness and general official madness that always accompanies a snow fall (or flurry, on some occasions).

All London buses being cancelled. Eh? All of them? Every single one? Not even anything on central, gritted roads, until mid-morning? Fffft. When I were a lass in t'North, this'd never a' 'appened. Bus companies claim the roads are unsafe - maybe they ought to do some winter weather training...

Train company websites, which are either down, pointing to National Rail Enquiries (who are somehow still running normally), or displaying a bizarre default page (“The following services are running normally: x to x via x”; thank you Southeastern, most informative).

But our winner is TfL's explanation for why the Waterloo & City line was suspended this morning. Adverse weather conditions? Staff shortage we could believe, but was it snowing in the tunnels?!

Spotted any others as you're huddling over a steaming cuppa? Let us know.