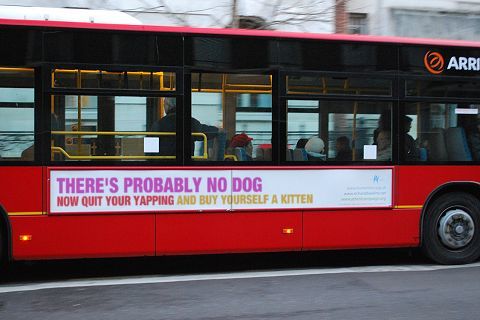 The atheist bus ad sparked a lot of controversy, but perhaps the most trenchant issue was the wording of its message. For some it was too agnostic to be of any worth, for others, it was simply a glib and meaningless message. The ASA even got involved, while the Christian party launched their own uninspired comeback.

Didn't like it? Now you can make your own. In the spirit of the ever-popular Evening Standard Headline Generator, some enterprising wag has created a bus slogan generator. Simply put your witty message in the fields, click "generate", and, like some omnipotent advertising deity, you can let the wrath of your wit smite your foes, Old Testament-style.

Thanks to Steve Cromwell for the tip