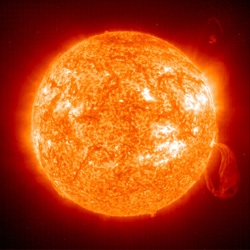 Wimbledon-based pensioner Christopher Stevens attracted police attention after placing a Wanted ad for an electrical component in the Radio Society of Great Britain's members magazine. It may have been the small print that did it:

I want see if I can create a thermonuclear fusion reaction. There is a danger from radiation and a possible nuclear explosion if the power runs away.

Stevens, who shares a house with his 96-year-old mother, is a practitioner of that Great British tradition: tinkering. His pet projects are marginally more ambitious than most, however; he seeks to solve the world's energy problems by creating a nuclear fusion reactor.

In what might just be the best story the Daily Mail have ever published, Mr Stevens explains how his device could have evil applications:

Yes, the design can be adapted to create a nuclear bomb. An extreme Christian terrorist group did approach me, but I've got no interest in blowing anybody up.

After taking advice from scientists, the police decided not to spoil his fun. The world's greatest minds have spent billions trying to harness nuclear fusion, so far without success. The idea of a retired lab technician succeeding with a few off-the-shelf components from Maplins is laughable, and we've been here before of course. But you've got to admire that Wallace and Gromit spirit.