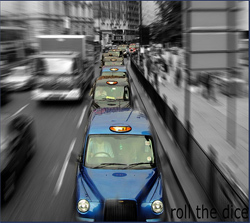 While not normally the shy and retiring types, London's cab drivers tend to maintain a fairly low profile on matters to do with their trade, keeping things in-house. But on Thursday this week, a 'drive-in' protest will take place in Trafalgar Square .

Organised by the London Taxi Drivers Association (LTDA), London Cab Drivers Club (LCDC) and Unite, drivers seek to highlight a number of grievances that have been plaguing the cab trade in recent times. Chief amongst which is the slow muddying of the waters between private hire (mini cabs) and taxis (black cabs).

This issue was brought to a head recently after the Public Carriage Office (PCO) appeared to give permission for a private hire firm, West 1 Cars, to set up a virtual rank in Whitcomb St, just to the west of Leicester Square. Private hire firms have been flouting the law for years now with the introduction of 'clipboard johnnies' outside popular venues, or setting up 'offices' within hotels. This latest turn of events seems to be the straw that has broken the camel's back, and cabbies across the city will mobilise on Thursday.

It isn't just on the roads that cab drivers are getting their act together. John Kennedy (sometime contributor to late night radio on BBC London) has launched London Taxi Cab Public Relations, in an effort to publicise cab drivers' issues and generally promote the cab trade. So be prepared for a full frontal attack over the coming weeks and months. The cab trade is ready for a fight.

By Richard Cudlip. Image by Roll the Dice, from the Londonist Flickr pool.