Christmas may be a coming, but this hasn't stopped our music output here at Londonist.This week we've caught both Scottish Fiddler John McCusker at the Southbank Centre and Texan singer songngwriter Ben Kweller at Union Chapel. We also (along with the rest of the country) got very excited about Blur's reformation, got excited about Manu Chao at the Forum this week and introduced you to Swanton Bombs. Phew. 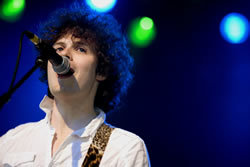 Looking ahead to this week however and Monday night sees Coldplay, James and the legendary Tracy Chapman all play sold out shows at the O2, Brixton Academy and Hammersmith Apollo respectively. If you want something that's not sold out, you could get some paint-by-numbers indie at the Roundhouse with the Fratellis (tickets £22.04 here), or alternatively we'd strongly suggest finishing your Christmas shopping!

Tuesday night features 70's "space rock" innovators Hawkwind at the Astoria - tickets are £20 each from See Tickets. Alternatively, Miles Kane (better known for his work with Arctic Monkey's Alex Turner as The Last Shadow Puppets) plays the Scala with his main band, The Rascals. Tickets are £9.79 each.

Herman Düne, an indie/antifolk band who hail from Sweden, France, Switzerland and Israel play Scala on Wednesday night - tickets are £12 each. Alternatively, the wonderful James Yorkston plays a festive show at the Luminaire - tickets are £10.50 each.

If you're not really feeling the festive season yet, then pop on down to Brixton Academy on Thursday evening where you can catch The Pogues rattling through their hits on the first of a three night stint at the venue. Tickets are £29.36 each. If you want something free, Sam Duckworth (better known as Get Cape. Wear Cape. Fly.) plays a free show at Pure Groove Records at 6:30pm.

To round out the week, legendary stars Madness play the O2 on Friday night - tickets are £34.26 each. Alternatively, Koko plays host to Stereolab - tickets are £14.68 each.

Photo of the Fratellis comes from Daniel Heaf's flickr stream.