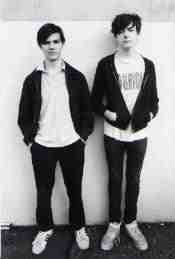 What with your favourite London-by-way-of-Essex Britpop band reforming and playing not one but two dates in Hyde Park, it's perfect timing to discover some more quintessentially London love from a indie native outfit. Swanton Bombs could be just what you're looking for. The two-piece band are currently disseminating their pounding riffs and story-laden lyrics around the UK, and are doing a very nice job at ticking all your catchy boxes without crossing the line into twee. You can definitely hear a bit of conversational Albarn in there with a noughties twist, the Bombs sharing the young Brit sound of the Friendly Fires without the synths and dance sensibility. We talked to Swanton Bombs' Dominic McGuiness about sheep, Sam Smith and hanging around.

Dominic McGuinness on guitar, piano and vocals and Brendan Heaney on drums.

Whereabouts in London are you based and what's rad about it?

Technically, I'm not based in London. I'm based in Barkingside in Essex which is fortunately on that loop of the Central line. Barkingside has loads to offer. The high street and the charity shops on it are my favourite things. There's a good KFC. And a large turquoise dome like piece of architecture for a library which I've always liked. I typed Barkingside into youtube recently and the first video up there pretty much brought it all back home to me. "Barkingside Boys" ... Brendan lives in Chingford which, judging by his postcode, means he's in East London. His place overlooks a reservoir and is probably the only place in east london that has sheep.

We are jealous. There are no sheep out of our window. What are you up to at the moment?

Massive amounts of hanging around. Well it feels that way. Everything is finally coming together for our EP which we finished recording in June. Since then we've been able to record an album ourselves at home called 'Smoke Over Swanton' which is available with the 7" EP on CD. We're about half way through our next album which we plan to record in February/March. So we're just practising as much as we can. Depending on who's house is free.

And why should we listen to you than every other new band out there? (aside from the answer above, of course).

I really like the 100 Club. I love the Astoria. And the Macbeth too.

The contents of my brother or my dad's shopping bags.

And your favourite club night?

I don't really go to the clubs much anymore. We all used to go to Afterskool in Holborn religiously for the free entry and cheap drinks. But now I find myself enjoying Push at Astoria 2. And White Heat at Madame Jojos too. White Heat often find good bands.

Tell us your favourite song so far this year.

22nd December at The Lexington in Islington. Supporting Noah & the Whale's punk side project ...

I don't think I have one. I used to think I struck gold everytime I found a Sam Smiths pub. But I've learned that they are lot more popular than I originally thought. Or taking advantage of the volume of free art thats on display. Again ... not really a secret.

You can also catch the Swanton Bombs in Cargo on 27 January - a perfect end to the detox. They release their debut EP ‘Mammoth Skull’ on January 19th.