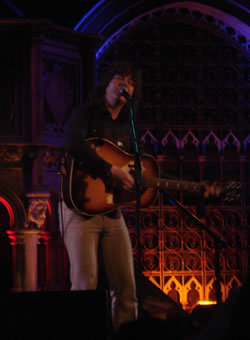 “Everyone is being so quintessentially English and not sitting next to each other” grumbled one woman as she and her boyfriend tried to find a place to sit before the gig started. How true it was - what’s more English that sitting in a 134 year old church, on wooden pews that make your bum go numb?

However who we’d gone to see wasn’t English - oh no. He was Ben Kweller,Texas’ finest singer songwriter to hit these shores for a while. But we’ll get to that in a couple of moments.

Once we’d navigated our way to the gorgeous chapel (with some of the nicest venue staff I’ve yet to see - take note, Academy venues), we took to our pews, complete with hot-dog and settled in for half an hour of Carrick, lead singer from “Everybody Else“, an LA three piece. After being amazed and awed by how skinny his legs were (seriously, they bewildered us for a good few minutes), we slowly fell for his wistful tunes, strong voice, and interesting bow-tie.

However, we were really there for Ben, and a couple of minutes after 9 he ambled on stage, joined by Kitt Kitterman, the sort of guy you don’t want to meet down a dark alleyway. Plowing through a set full of material both from his previous albums and his forthcoming “Changing Horses”, it seemed that whilst he worked incredibly hard the crowd were a bit subdued… whether that was due to the nature of it being a church, or just the collection of people is hard to guess, but either way there was no doubting Ben’s efforts.

Throughout his 90 minutes on stage we had such gems as a cover of Neil Young’s “From Hank To Hendrix” and “Different But The Same”, which was dedicated to Kitt as “he quite likes playing it and we don’t play it that much…”. To be honest, the 90 minutes flew by a bit too quickly - we would have been quite happy to sit there for a few more hours, hearing his whole back-catalogue, however everyone’s bums would have been completely numb by then.

The highlight of the evening wasn’t one of the established songs that everyone knew. Nope, it was one of the new ones, “Homeward Bound”, the closing track to “Changing Horses” and written by Willie Nelson’s parents in the 1950s and one little gem that has sat around for 50-odd years before Ben recorded it. It fitted the chapel perfectly, just needing a little choir and it would have been complete.

Shortly before closing out with “Penny on the Train Track”, Ben announced that he’ll be back in London on May 15th at Koko as part of a proper tour for “Changing Horses” - definitely a date to add to your diary.