Lost Rivers from Above: The Tyburn Part III

By paulcox Last edited 157 months ago
paulcox Lost Rivers from Above: The Tyburn Part III 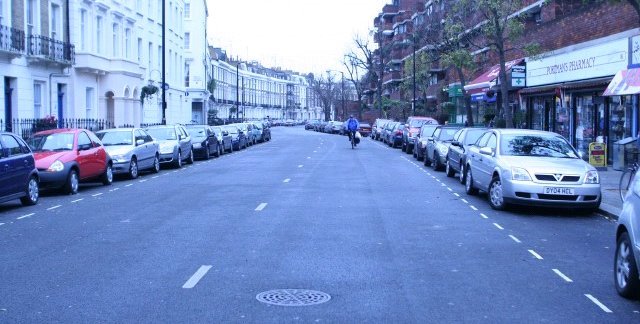 Helping you find the sights, sounds, and occasional smells of our buried waterways.

Part I brought us from the slopes of Hampstead to the ponds of Regents Park, and Part II led us across Oxford Street, but the Tyburn still has a lot of ground to cover before it runs its course. Mayfair, for starters.

By this point, the brook is largely analogous with a series of brick channels known as the King's Scholars' Pond Sewer. Their entire length has been traversed by a number of subterranean tourists, including a recent trip recounted and pictured beautifully on Sub-Urban.com. We who are not professional spelunkers can carry on at street level along South Molton Lane and across Brook Street. The Brook in question is ours, and the street's most famous composer-in-residence, George Frideric Handel, composed his Water Music tantalisingly close to the crossing point. It's probably far fetched to imagine him drawing inspiration from quiet strolls down neighbouring Avery Row. 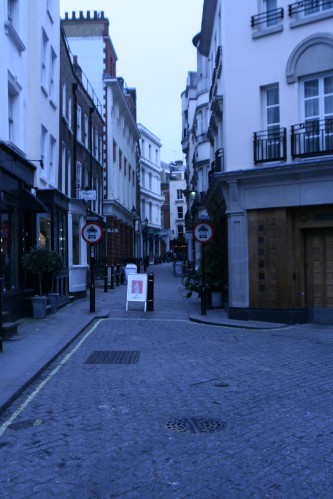 Avery Row and South Molton Lane were the creations of Henry Avery, bricklayer, who bricked over the stream's culvert in the 1720s. Bring your ear close to the grate in the centre:

Don't feel too silly if people stare; this is a favourite pastime of local character and property executive James Bowdidge, who serves as honorary secretary of the Tyburn Angling Society. The Society takes on a greater challenge than most anglers' clubs, promoting the restoration of the Tyburn river as the prime fishing stream they imagine it to have been in centuries past. The plan has caused no little bemusement, requiring as it would the destruction of more than £1 billion of property the likes of Buckingham Palace, but Mr. Bowdidge remains ever hopeful as housing values drift downwards.

For now, if it's Tyburn salmon he's after, we recommend a sashimi platter at highly rated Kyoto-style restaurant Umu. The waters run close beneath its floor, and we can hear them outside the entrance on Bruton Place. 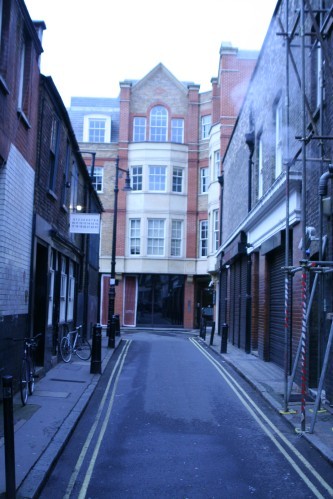 Most scholars now agree that the Ty- in Tyburn derives from a word for "boundary," and the stream has actually defined many boundaries over time. One is now marked less effectively by a tiny stone plaque on winding Bruton Lane, in the top left corner of this photo: 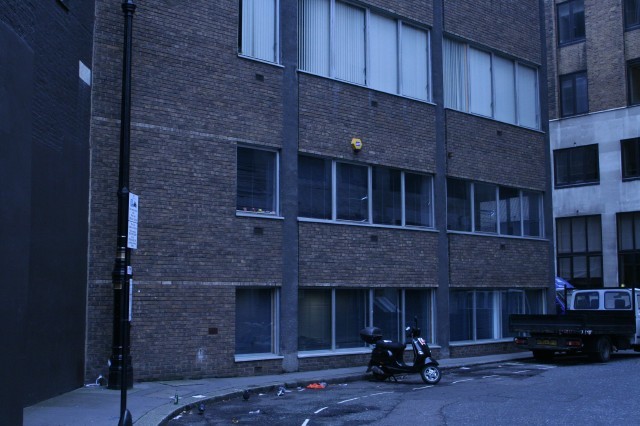 "This wall face is the boundary between the City's land and the Berkeley estate. 1894."

The City's land is Conduit Mead estate, a field on the Tyburn that Charles I sold to the City of London as an emergency fundraising measure. They still own it, but by the terms of the freehold have not been able to raise rents here since the 18th century.

The stream exits Mayfair via the Shepherds Market, where the original May Fair was conducted on its banks until authorities evicted it in 1764. From here the Tyburn plunges under Green Park, and a mystery begins. There's much evidence that the stream once flowed west, possibly branching at its end to form the Thorney Island on which Westminster Abbey was built. Whatever the case, the modern course is clear thanks to the King's Scholars' Pond Sewer. This runs directly beneath the park and Buckingham palace, and there's not as much to see for the remainder of its run across the flat plain of Pimlico. The next stretch of note is King's Scholars Passage, named after the same schoolboys of Westminster School whose nearby swimming hole gave its name to the sewer. This long, lonely stretch of bricked over stream is just a service road, but it almost feels like it could be a ravine carved out by the flow of water echoing from the sewer grates. 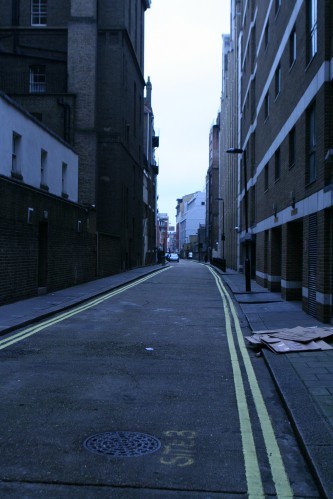 Through Pimlico, much of the Tyburn is beneath the wide and winding Tachbrook Street, the Tachbrook being the name for this southern culvert of the stream. The street is pictured at the top of this post, from the south end looking back, over a grate where the waters can be heard. The north end of the street is given over to a market, where we find more fresh Tyburn fish for sale. 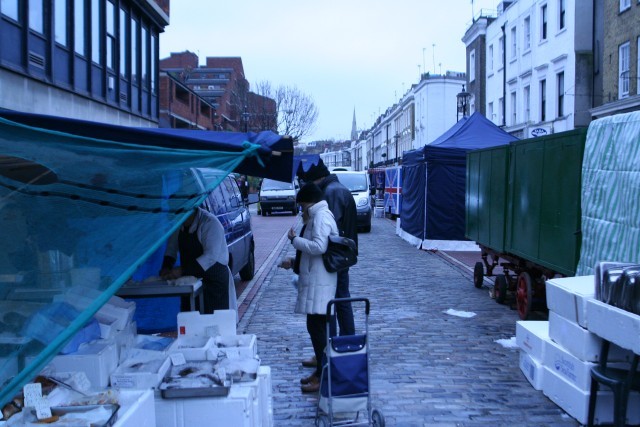 At the end of Tachbrook Street the course dives beneath a housing estate and reappears just in time to join the Thames. Where Grosvenor Road curves in close to the riverside, on the promenade of a waterfront development called Eagle Wharf, we find verification: 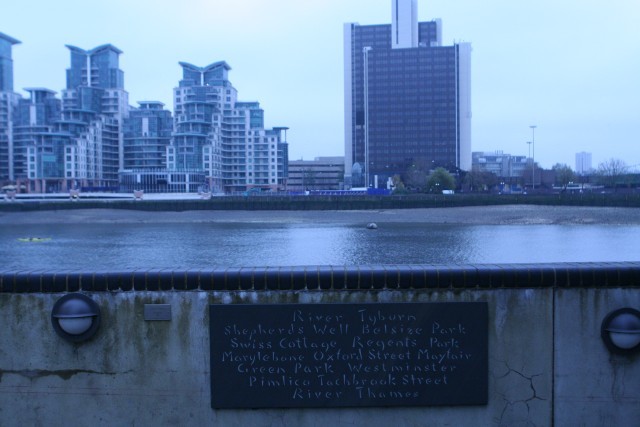 At this point most guides instruct us to various points of vantage — such as the other side of Vauxhall Bridge — to spot the actual outflow, but new development has once more provided a ladder down to the mudflat. At lowest tide, the mouth of the Tyburn is easily spotted. 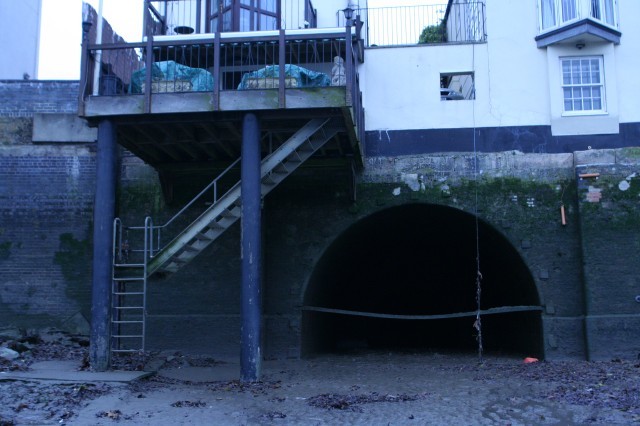 There's not much more than rivulets across the soupy sand to see of the venerable stream here today, but such is the Tyburn's modest tribute to the Thames. Iron sluice gates constrain this portal to times of emergency overflow, much to the river's benefit. The Tyburn's waters, steeped with the effluence of affluence, are no longer fit for mixing into the carefully protected Thames. Nonetheless, while removed from its job as a tributary, the river Tyburn is enjoying its quiet retirement beneath the city and does appreciate the odd visitor. 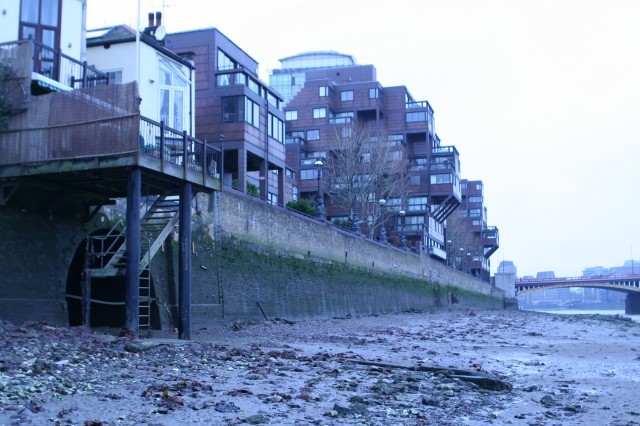