By M@ Last edited 174 months ago
M@ Londonist's Back Passage 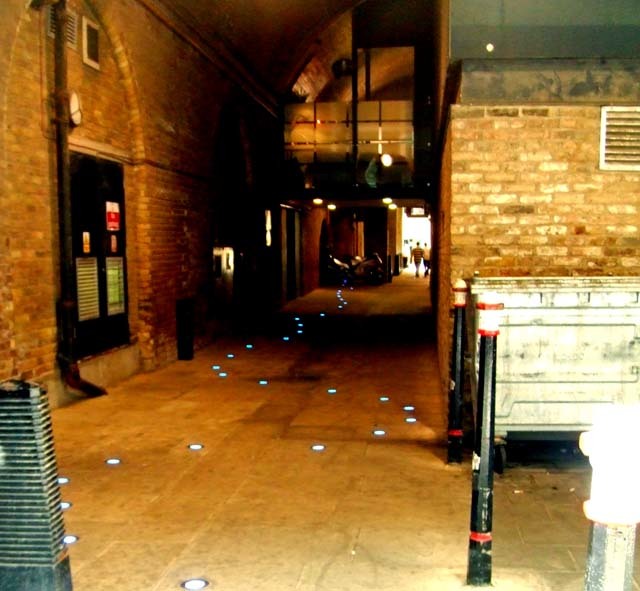 What? Of all the byways we've commended in this column, none has presented such a singular collection of historic factlets and neoteric curiosities as Steelyard Passage. The Victorian brick arches are immediately atmospheric, plunging the passage-goer into an otherworldly darkness that banishes the open skies of the Thames. The first thing you notice is the azure lighting that snakes along the pathway. This is the 'river of light', part of a curious regeneration project from architects The Facility . Well, you could see it as a glowing representation of the Thames, but as children of the '80s, our first thought was 'looks like the guy out of Tron has been stabbed, before staggering back to his motorbike'.

In its defence, Steelyard Passage is one of the least noisome spaces we've seen in our tour of London's snickleways. The recent improvements have reduced the numbers of homeless people sheltering down here, and the whiff of chlorine from a neighbouring swimming pool olfactors out any lingering piss smell. But you can't expel the rats. Indeed, there's a Banksy rodent at the eastern end, carrying a 'You Lose' placard.

So much for the modern aspects of this passage; we now turn to its surprising history, and that's no idle adjective. This stretch of the Thames was occupied by Germans and functioned as an independent enclave for 600 years. These particular Teutonics were traders rather than raiders, setting up an outpost for the Hanseatic League in the 12th century, on or near this spot. Over the centuries their territory grew to encompass a sizable dockside area known as the Steelyard. The 400 or so inhabitants kept themselves to themselves, minting their own currency and regulating their own trade practices. Eventually, their privileges and taciturn ways began to irk the Tudor monarchs, and Queen Liz booted most of them out. But a German presence lived on, and the last merchants left the area as late as 1853. Cannon Street station was built over the site shortly thereafter. A plaque on the eastern side of the bridge commemorates this long association.

Why use? What, that's not enough for you? Be advised that a decent riverside pub lurks just around the western corner. The Banker sits beneath an adjacent arch to Steelyard Passage and gives a much quieter riverside view than its rivals on the South bank. In fact, it nestles on the corner of two rivers, as the long-buried Walbrook once emptied into the Thames a little to the West.

See a map of all our back passages.