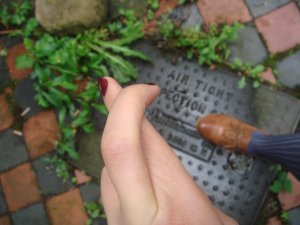 This weekend column is brought to you by the founders of Niceties Tokens, Liz and Pete of Team Nice.

Along with an unhealthy obsession with social interaction on London’s public transport (which is what Team Nice investigates), I am very superstitious. Saluting magpies and not walking across three drains is an everyday occurrence.

Crossing the road at the traffic lights the other day, I sidestepped the third drain, and in doing so stepped very closely to a city gent. Finding me in his personal space when no one else was at the crossing at all, he immediately slapped his hip. Understandably, he thought that I had stolen his wallet.

Also, when a friend of mine was on a packed bus, a man got on and rapidly started to look unwell, sneezing into his hands. He noticed there was a dog on the bus. It turns out he was allergic to dogs, and now stuck on a packed bus. He was quite vocal about it, using words like ‘disgusting’ and ‘unhygienic’. Poor bloke, he was clearly having trouble and his comments got a few sympathetic looks.

But as this situation got more attention, people noticed that the dog in question was owned by a very quiet blind lady, who was now looking uncomfortable. An awkward situation got steadily worse as his aggressive words got louder, to the point where the woman got very upset and started crying.

What a complete wanker. Why was he being so horrible for the sake of a few sneezes? Watching this, my friend realised that there was something more to the man’s behaviour, possibly Asperger syndrome. He wasn’t being confrontational at all to the blind woman, just overly verbal.

Lack of personal space on the commute increases anxiety anyway, but what other odd behaviour by our fellow commuters would not wind us up if we understood their point of view?