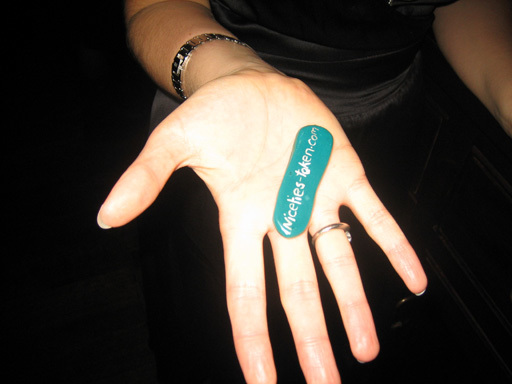 You may have seen Liz Akers smiling from the news pages lately. You may have even seen her smiling at you on the tube or bus. If you're very lucky, and deserve it, she may have even handed a small 'nicetie token' to you on your commute to work (because you've acted in a nice way, not because you have a nice tie). Liz has earned her 15 minutes of fame, perhaps more, by setting up a kind of reward scheme, which awards the tokens for acts of kindness to strangers. The tokens carry a URL where you can register your good deed and sign up to Team Nice - a group of like-minded, friendly people. The scheme hopes to promote and track a chain of benevolence across the capital. And it seems to be going well, judging by the emerging backlash (always a mark of success). We caught up with Liz to find out more...

So, tell us a bit about yourself.

My name is Liz, I was born and brought up in Sidcup and then like many surburban-born kids, moved slightly nearer in to london, when i got a bit older. I live in Brockley, SE4 with a flat mate and my 3 cats. I have a revolting sense of humour and i swear a lot - even though I pride myself on my niceness. 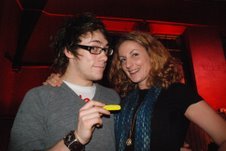 Where exactly where you when you had the niceties brainwave?

[On] my commute to work (which is a half hour bus ride) one morning, a woman was having a go at the bus driver and at the next stop the bus driver didn't wait for someone that was running for the bus. I don't doubt that his mood was less considerate to others, becuase someone else had been rude to him. I have done it myself, if someone on a packed bus treads on my foot and doesn't apologise then I find myself less likely to be helpful (ie, only stepping off the bus so that people can get off, or ringing the bell for someone).

And thats where the idea of passing niceness around london came from, but also tracking the tokens journey, was also intersting - where would they go? Would i know everyone by 6 degrees of separation etc.

How's the scheme going so far? Have any niceties tokens changed hands several times yet?

Yes, some have. It is so exciting when they get passed on - some people are hanging on to them so that they can use them as rewards for people being nice to them - which is fine but a niceties-token is best used to start a nice chain of events rather than a link in the middle.

How big is Team Nice now?

About 500 strong so far, but it's growing every day, as anyone can join as long as they consider themselves nice people.

Have you been in touch with the 'Up for a chat on the Tube' folk?

Nope not yet - but will be - it's amazing when you start a project like this that you realise that there are so many likeminded people out there.

Do you have plans for other Nice projects?

We are currentely working on our website to make it more inteactive, so that should be much better very very soon. We are also discussing having more launch parties in different cities around the UK, to get a new batch of tokens into circulation in [each] city.

Team Nice will all be invited to partake in a few experiments and projects - none of which will cost them a penny or involve anything remotely scary...does that sound intreguing?.. good.. sign up then! 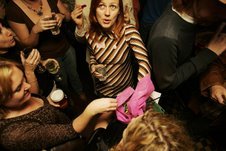 Do you think Londoners really are more grumpy than commuters elsewhere? New York subway, for example, didn't appear to be overflowing with rapture and joy last time we checked.

No not at all - I think in any big city, where people havent got enough personal space, rudeness can breed very very quickly. I am more than up for a niceties-tokens launch party in New York.

Which is the happiest tube line?

To me it's the Bakerloo line, as when i was a kid my mum used to take me to Hamleys and Oxford Street for my birthday and we would get the tube from charing cross.

Have you seen the passageway between the Thameslink and deep-level tube at Kings Cross? It says 'SMILE' in big happy 1980's lettering, all along it. Maybe you could campaign for more upbeat signage like this?

Have you thought about launching a happy blog, to keep people updated about the project?

Yes, although will people really want to hear my waffling??

What's your favourite place in all of London?

It sounds a bit trite, but when i was working in the City and walking over London Bridge each morning, I was always chuffed looking out towards Tower Bridge and the Tower of London. It's an amazing sight that I'll always love. Being in Liberties and pretending that I could buy whatever I wanted in there.

Do you have a favourite pub/bar?

Many! The Sun and 13 Cantons in Soho is great as it's not poncey, and it's special to me as we used to go to parties there when i was younger so i had my niceties-tokens launch party there too. My local at work is a fantastic dirty old pub that smells of stale beer but i love it - they have closed for a refurb at the moment and I am worried that the smell will go.

No I havent - although I did come out of a tube station one night, up the stairs and felt rain splattering on my hair, I turned round to see a boy puking over the railings. Our eyes locked and he grinned at me.

If you could get Ken to change one thing about London, what would it be?

To give us as much green space as possible - everyone is always more cheerful when out and about.