To Jerusalem, From England's Green And Pleasant Land 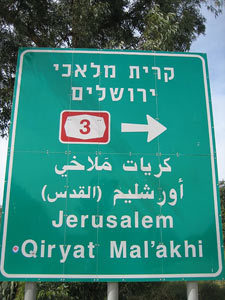 Fancy a trip to Israel? But don't fancy lining up at LHR to pile onto a tedious flight? This might be what you're looking for: a car rally from London to Jerusalem - in vintage vehicles, no less!

As part of the State of Israel's 60th Independence Day, the Jewish National Fund is aiming to raise some £250,000 for residents of the Negev desert. Hence this 18 day rally, during which drivers will meander on a pleasant route through continental Europe before crossing the Mediterranean to the Levant by either boat or cargo plane (and hence avoiding going the long way round through some of Israel's less benign neighbours - we're looking at you here, Syria). The convoy will be made up of several prominent members of England's Jewish community, along with some from the US, Switzerland and Ireland. Some are making the journey a part of their aliyah, or permanent move to Israel.

Being prominently a fundraising event, however, participation in the rally doesn't come cheap. Cost per person is about £17,000, while the honour of leading the convoy - and being the first person to drive through the Knesset gates - will cost three times that. Still, the entry price is dwarfed by the value of the vehicles, which includes a Cadillac from 1942 and a Rolls Royce from 1948. They have a collective price tag of some £41 million, and will be displayed at the Knesset upon arrival.

If an overland trip to the Middle East appeals, but the price tag has put you off, then rail travel expert - and former Londonist interviewee - The Man In Seat 61 has advice on how to get there on his website.