One of Londonist’s fave websites is seat61.com. Now this is not because we are closet anoraks, or are forever secretly planning our escape from the capital – it is just a damn fine website. Everything that you ever wanted to know about trains but were afraid to ask. Not just London, but worldwide. Journey to plan? We bet your travelling conundrums are already addressed on the man in seat 61’s site. It is a mammoth task, the work of a lifetime – think Shakespeare, or the Pyramids - but somehow it has been accomplished, and by just one man in, well, not long at all actually.

We caught up with Mark Smith, internet star and train-spotter extraordinaire, to ask him a few questions…. 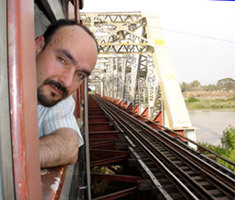 We imagine that you have been asked this question once or twice before…but why ‘the man in seat 61’?

I have to blame Eurostar. It’s my favourite first class seat, one of a pair of armchairs facing each other across a table with an unobstructed view from a picture window. Lovely! I’ve left London in Eurostar’s seat 61 for places as disparate as Marrakech, the Crimea, Damascus in Syria and even Tokyo via Vladivostok.

Did you want to be a train driver when you were a wee laddie? Have trains always fascinated you? And are you a trainspotter?

Drive the train? Heaven forbid! I’m much happier sitting back with a glass of red and letting someone else do all that! Travel’s the thing, trains and ships are easily the most interesting, comfortable and civilised way to go about it…

This Londonist has trouble managing a few paltry postings a week – how on earth do you keep your site in order and hold down a real job as well? How long did it take to build the site?

Frankly, I don't know how I manage, either, with a full time job and helping bring up a very active one-year-old at home. But an hour and a half commute to London every day can be put to good use! I started seat61.com in 2001, and it’s grown and grown since then.

You must have a favourite London station… which is it and what makes it special?

100 staff and 100,000 passengers a day, easily the most interesting and hassle-some job I've ever done! Dealing with royalty one minute, trains hitting buffers the next…

Do you think things will change much when Eurostar moves to St. Pancras? Is it a good thing?Suddenly, whole swathes of northern England will become closer to Paris and Brussels by train than they are by air, with one simple change at St Pancras. And there's more to come. Coupled with a new high-speed line due to open across Holland in a year or two, London to Amsterdam will become a relaxing and productive 4 hours 6 minutes by train. Given 2 hour check-ins, an hour flight and another hour wasted getting to and from the airports, high-speed trains could give the airlines something to think about on what is now one of the busiest air routes in Europe.

Do you like the Underground, or doesn’t it count as a real train?

I commute on it every day, and don't we all love a free sauna on the way to work? Still, it’s quintessentially London, where would we be without it? 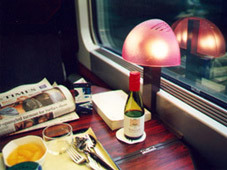 If you had a magic wand, what one thing would you do to improve London’s current transport problems?

We urgently need Crossrail, and Thameslink 2000 (or is it 3000 by now?). Like the RER in Paris, this will bring suburban trains right through the centre of the city and out the other side, relieving the Underground and for many passengers, avoiding the need to switch from train to Tube at all. But whereas other countries seem to plan ahead, we Brits prefer things to reach crisis point before we do anything.

You seem to have been most everywhere in the world. Do you have a secret travelling tip that you could share with Londonist?

Only the Man in Seat Sixty-One’s top tip: Never travel without a good book and a corkscrew!

Have you ever been sick on the Underground?