Why Don’t Creationists Just Shut Up?

By M@ Last edited 171 months ago
M@ Why Don’t Creationists Just Shut Up? 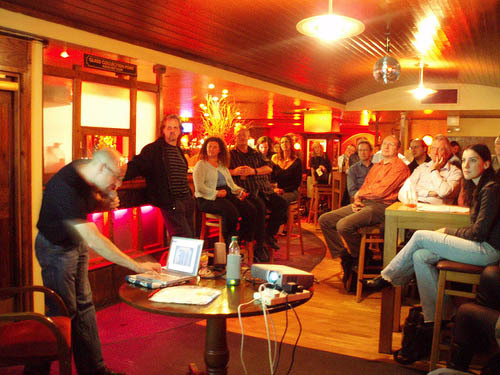 That's one of the relaxing conversation pieces to be found at a ‘Skeptics in the pub’ meetup.

Tonight’s guest speaker is Dr Matthew Smith from Liverpool Hope University, who will talk about fate, the meaning of life and mid-life crises.

We caught up with co-organiser Sid Rodriques to find out what skepticism is, and whether we should be skeptical of it.

How would you define a 'skeptic'?

A skeptic is someone who asks for good evidence, usually with regard to strange and controversial claims.

Are there any famous examples of skeptics?

The most notable skeptics are James Randi, who has his $1 million paranormal challenge in the US and Michael Shermer, who has his 'Skeptic' column in Scientific American. Other well known personalities include Stephen Fry & Hugh Laurie, Robin Ince, Julia Sweeney, Penn &Teller, Tim Minchin, authors Simon Singh, Robert Rankin, Richard Wiseman, Richard Dawkins and Jon Ronson. There are numerous others but, I'll spare you.

Where did the 'in the pub' idea come from?

The idea came from Dr Scott Campbell, a philosopher from Australia who now works at the University of Nottingham. They have a few 'Skeptics in the Pub' in Oz. Scott brought the format over here while he was working in London. There has been at least one occasion where the attendees of Skeptics in the Pub have spontaneously broken into Monty Python's "The Bruce's Philosophers song" whilst Scott was chairing a meeting.

We’re sKeptical of the US spelling. What gives?

This is mainly a boring historical aspect. Scott Campbell, is an Aussie, so the adopted spelling was with a 'k'. Also the Skeptic magazine's first editor was science and tech journo, Wendy M.

Grossman, who is American. The UK and US spellings have slightly different definitions, the one with the 'k' being more open-minded, enquiring and less cynical than 'sceptic', so we decided not to bugger about with it.

Can you point readers to any good resources about skepticism?

The Skeptics Guide to the Universe podcast is one of my favourites. Rebecca Watson has always been my favourite skepchick, she has a great blog to boot. Most will be aware of Ben Goldacre's Bad Science website and column in the Guardian. For podcast and net radio, check out Point of Inquiry and Little Atoms and for or a good reference site, the Skeptics Dictionary - by Bob T. Carroll - covers most topics of interest.

What sort of people turn up?

We get quite a mixed bag of around 100 people each month; from students, lawyers, philosophers, IT consultants, psychologists, psychotherapists and journalists to Forteans, folklorist, UFOlogists and alternative medicine practitioners...and me.

Do you ever get hostile audience reactions? Skepticism can attract a few cranks.

It depends on the speaker. If we have a proponent of a controversial theory/philosophy, they tend to bring a few of their supporters along and they can get a bit lairy… sometimes. If we have a sceptical speaker, they usually get a much harder time from the audience. For instance, Victor Stenger mentioned that he got asked some of the most difficult questions of his career when he gave a presentation last year. A mean feat for a pub meeting, don't you think? Obviously, having one too many alcoholic beverages can exacerbate the over excitement of some attendees.

Over on the Skeptics Guide to the Universe podcast, they're making predictions for 2008 - big news, deaths, that sort of thing - to compare with the results of self-proclaimed psychics. Care to give us a few predictions of your own, which we can review at the end of the year?

I'd prefer not to – as I'm rubbish at making predictions. Then again, if you have enough of them and they're vague and general enough, some of them are bound to be correct with a certain degree of interpretation.

1) Clinton will be back in the White House.

2) A musician/singer out of rehab will sing the next James Bond title song.

3) There will be another world terrorist threat.

4) A country's leader will be killed.

5) There will be an international crisis.

Vague enough for you?

If you could offer the mayor one bit of advice, what would it be?

Of all the supernatural phenomena (ghosts, flying saucers, psychic abilities etc...) which one do you most wish were true, and why?

I quite like the idea of having X-ray vision. Not only would you be able to diagnose ailments, prevent crimes being perpetrated, etc. You could also become a nosey-parker and pervert of gargantuan proportions.