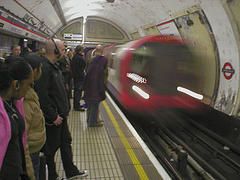 We know, it's hardly shock anymore if you hear that underground lines have major delays. Londoners are pretty used to that. But it gets a bit more serious when it's due to issues with the emergency brakes. This is quite scary.

The lines in question are the Circle, Hammersmith and City and the District which all affect each other. As they cover pretty much half of London this causes serious problems. But TFL and the RMT have raised concerns about the traction break controller. This is the little button that drivers have to keep pressed down to make the train work. It stops if the driver faints or something like that. Very handy.

Trouble is, they're looking pretty dodgy and the drivers don't feel that they're safe enough to take out. Fair enough. We'd rather walk than be on an unsafe train. But when Bob Crow calls an emergency meeting, we can't help but think it'll end up being for his own agenda. After all, it seems that Mr. Crow doesn't do anything without one.