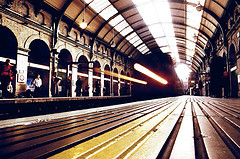 We all knew it was coming. Yet another tube strike. As of 6pm this evening, we're going to see 72 hours of chaos as more than 2,300 RMT members have promised to walk out. (The TFL website says services will not return to normal until Friday morning.) And what can we do about it? Absolutely nothing. We've been told to 'finish our journeys by 5pm or jump on the DLR'.

So what's the deal? Well, lucky us, the Jubilee, Northern and Piccadilly lines should be running as normal. Though of course, these are going to be hugely over crowded. NO OTHER LINES ARE EXPECTED TO RUN. This means that until Thursday 6pm, there is no service on: Bakerloo, Central, Circle, District, East London, Hammersmith & City, Metropolitan, Victoria and Waterloo & City line.

Now, we know the union have been fighting for job security since the collapse of Metronet. But do they have to hold the whole city to ransom to do this? This seems ludicrously unfair and Londonist believe that underground passengers would be hugely supportive of any action that didn't screw up our daily lives. It's a little difficult to be supportive at the moment when Londoners are being used as pawns in a game.

Maintenance works will also not go ahead, meaning more problems in the future when the underground workers have stopped throwing their toys out of the pram. People get made redundant every single day. Yes it's terrible but why do millions of other people have to suffer?

What really annoys Londonist, is that Metronet and Ken Livingstone have assured them already that the concerns they had have been addressed. So why is the strike still going ahead? We have no idea what right the unions have to do this now the issues have been apparently resolved. Disrupting the lives of millions isn't exactly the best way to get results. Having a whole city against what you're fighting for doesn't seem like the best plan of action.

Although the strike is still planned, we'll keep you updated if there's any news. Currently, as services are likely to start winding down around 4.30pm we suggest you find other ways to continue your journey. As always, feel free to comment and tell us what you think.

The Piccadilly line has severe delays too. Nothing to due with the strike, it's a signal failure on one of the only lines running.

If union members don't get what they want, rumour has it the same action is planned for 10th September as well.

5.15PM - Oxford Circus and Paddington Station are both exit only due to overcrowding.

5.30PM - "Due to Metronet industrial action the service is suspended between Rayners Lane and Uxbridge". On the Piccadilly line. A line that was meant to be running with no problems.