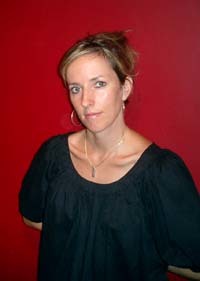 Kate Monro is working on a book about that most intimate subject: how people lose their virginity. She's interviewed Londoners old and young, male and female, gay, straight, Muslim and Roman Catholic, able and non-able bodied. And she's always on the lookout for, ahem, a new angle...

Why are you so curious about how people lost their virginity?

I’m nosy! No, seriously, it came to me in a light bulb moment. A friend and I were making each laugh with our own stories and I thought, that’s it. Everyone has a story to tell. It doesn’t matter who you are or where you come from, this is the one unifying human experience and certainty–almost all of us will lose our virginity. I vowed then and there to interview as wide a cross section of people as I could. The oldest was 101 years old and the youngest 17.

How did you lose yours?

In Spain. The parents of one of my friends agreed to take a bunch of teenage girls on holiday. We had the best time ever, but I don’t think they did. The actual experience was not the sexual highlight of my life, but that wasn’t the point. It was what it represented and as far as I was concerned, I was now an adult of the highest order. He was also very handsome, which just made it better. Do I regret it? No. It was what it was. I learnt a lot along the way after that and that’s what life is all about.

Have you found it hard to get stories out of people?

Surprisingly, no. I started with friends. They are actually harder to interview because you bring your own preconceptions to the table and they bring acute embarrassment, it’s an odd situation. It’s much easier to talk to people you don’t know, for many reasons. But to answer your question, people seem to find the experience very therapeutic and once they finish, they are soon passing me onto friends, relatives, grandparents, you name it. If anything, I can’t keep up with the amount of people who have offered to tell me theirs. I have struggled with specific stories. I still haven’t found a man who lost his virginity to a prostitute - and is prepared to tell me about it. Any takers?

Losing one’s virginity requires at least two people, and you only interview one in each case. Aren't you at risk of litigation by third parties?

All names are changed to protect identity. I spend many happy hours trying to think up new names for people. If locations are prominent, I change those as well.

Do you conduct the interviewees in person or by phone/email?

In person. I think the subject matter is too sensitive not to do it that way. So much communication is in the eyes and expression. To really get the measure of a person I think you need to be sitting in front of them, and vice versa – they need to trust me. I don’t think that level of intimacy could be achieved on the phone. There are times when it would have been easier to do it by phone but I see the travel as part of the whole process of getting a great story – well, that’s what I told myself when I drove to Land’s End to get an interview. But it was worth it because it turned out to be one of the best.

Have you noticed any cultural/racial/class trends?

That’s an interesting question. I think if I had interviewed literally thousands of people, you might begin to see patterns, but no. If anything, the one thing that I am more certain of than ever, is that when it comes to sexuality, you cannot make assumptions about a person based on class, race or cultural differences. People astonish me constantly by saying the exact opposite of what I expect them to say. You couldn’t make it up but its all true.

So many things. I keep coming back to the present day and the amount of information that younger generations are privy to. As a result, I think I expected to see a proportionate amount of improvement in people’s first sexual experiences, but it’s not the case.

As one of my interviewees once said, ‘you can tell people a lot of stuff and draw them diagrams but they’ve still got to actually experiment, get feedback and change the way they behave so it doesn’t really matter’. A first time is a first time, no matter what era you were born into or how much information you have.

The most surprising thing of all is how much people of all types and ages, have embraced the opportunity to talk to a complete and utter stranger about their sex lives. We start the conversation with virginity loss but it never ends there. The only way to put that experience into context is to explore one’s intimate life right up to the present day. I guess we don’t get that many opportunities to really see how far we have travelled. Our sex life is a brilliant barometer of that.

And the weirdest tale you have been told?

People drop some absolute clangers but the one that seems to mess with people’s heads the most is the fifty-two year old man who has never had sex. He has been married for twenty-one years. It is odd, I know, but I also think it’s very symptomatic of the world we live in and how much society has changed in the last fifty years. By today’s standards, an adult who has never had sex, for whatever reason, is a complete and utter anomaly.

Have you been able to get the song, ‘Like a Virgin’ out of your head. Even for a few hours?

Don’t have an issue with that. The one I struggle with is, ‘Do you remember the first time?’ by Pulp. That’s pretty much on constant replay.

What are you planning next?

I would love to go deep into the heart of America and collect stories for another book. Can you imagine some of the weird and wonderful charactors I might encounter? It would make a great documentary.

What would you say is the most romantic place in London?

My bed. Ok, if you twist my arm, I’ll go with the long grass on Hampstead Heath.

Do you have a favourite bar/pub?

The Windsor Castle in Notting Hill is pretty special but you can’t beat the White Swan in Twickenham for river views and pure atmosphere on a summer evening.

Who should stand in the upcoming Mayoral elections and why?

I’m gonna plump for Gordon Ramsey, he should liven things up a bit.

No, but I know someone who once saw a businessman barf in his briefcase.

Kate is still on the lookout for unusual cases – so if you lost your innocence to a prostitute, or first formed the beast with two backs while competing in an international luge competition, get in touch. Read her blog.