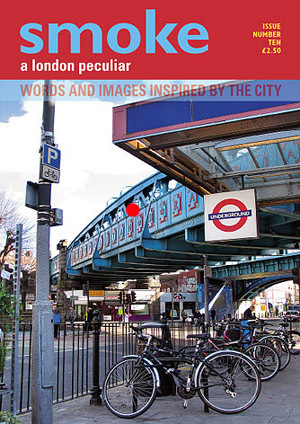 Smoke, Issue 10 is on sale now. This 'love letter to London' is available from some good newsagents and bookshops, and a few more tawdry outlets for £2.50. Highlights include the Hampstead fish who are evolving to look like William Morris carpets, where to find an alternative universe in Hackney and a double whammy of London's campest statues. There are undoubtedly other good articles in there, but we've only read the first half so far and don't want to spoil things for ourselves by dipping into the latter part prematurely. Instead, we spoke to editor Matt Haynes, who over the years has been responsible for around 500 pages of London-based fun and nonsense. Time Out staff, look away now...

Fill us in - how long has Smoke been running now, and how the deuce is it getting on?

April 2003 is our official birth date. And in the four years since then we’ve published ten issues. Some people like to argue that this makes a nonsense of our claim to be quarterly, but these people clearly haven’t grasped some very basic physics: as Albert Einstein, Stephen Hawking or the controller of the Northern Line will tell you, Time is relative, and slows down when approaching a black hole, Clapham North, or any sort of printing deadline.

I think it’s getting on OK – we’re printing 5,000 now, most of which eventually sell. Occasionally Foyles will find 50 back-issues hiding in a cupboard and ask us to take them away, but we blame this on Foyles having too many cupboards, not on any problem with our content, marketing or distribution.

Not that we have any marketing or distribution; though having spent most of today cycling round south London in the rain trying to offload copies onto unsuspecting bookshops, I’m increasingly toying with the latter.

Reflecting on Smoke's first ten issues, what will posterity declare was your finest hour?

The trouble with posterity is that it’s horribly clear-headed and objective, and never open to bribery and the trading of sexual favours. I, on the other hand, am totally open to both, so I’d rather not pick any one writer - or at least not without telling all the others first and giving them the chance to make me an offer. That said, I’m probably fondest of those articles which seem to come out of nowhere, and which I can’t imagine any other magazine printing, as that sort of justifies our existence. Way back in Issue 2, for instance, Seb Brennan, undeterred by our city’s lack of a coastline, devised a shipping forecast for London, and I’m really not sure what he’d have done with it if we hadn’t printed it. I like to think we provide an outlet for people like Seb who, in the days before Smoke, would probably just have ended up in some sort of long-term institution, nodding quietly at the rain. Whereas last I heard he was doing just fine.

Or perhaps posterity will remember us for the excellence of our gig and film listings. Oh no, hang on – that’s Time Out. I do increasingly get Time Out and Smoke confused these days.

Word association: what’s your reaction (verbal, emotional or biochemical) when someone utters the words 'Time Out'?

I used to think that features such as “Places In London Which Aren’t Where They Say They Are” and “Statue of the Week” were the acme of the kind of original and witty ideas that give Time Out its unique and inimitable flavour, but they’ve now surpassed themselves by introducing a brand new column which each week focusses on a different London bus-route. That’s just brilliant - no other magazine could have come up with an idea like that. In fact, I’ll be perfectly honest with you: whenever I read the articles in Time Out’s ingeniously titled Big Smoke section, I just want to leap in my time-machine and introduce similar ideas to Smoke three years ago.

I also thought, incidentally, that the 17 pages in this week’s issue detailing things to do in places which aren’t London were excellent; I was also delighted to discover at the end of the piece that more writing in a similar vein could be found in the Time Out guide to Weekend Breaks, available in all good bookshops for £14.99.

Any plans to revamp the mag, or are you going for the if-it-ain’t-broke-don’t-fix approach?

When we started, we had no idea what we were doing, as neither of us came from a publishing background, and we’ve basically learnt as we’ve gone along. Hopefully, this means each issue has been less comically inept than the one before but, if you’re hard on yourself (which you must be), there’s always going to be something to fix, always something that could be done better - even if, hopefully, the fixes become more in the nature of tweaks than major overhauls. I’d say that, in mathematical terms, if perfection = 1, then the quality of issue N can be defined as 1 – k/(N x N), where 'k' is a constant which, for the sake of argument, I have called Kevin. Is this what you were getting at?

Also we introduced a colour cover on the last issue, because it looked pretty.

What's the most baffling enquiry you've ever received about Smoke?

We get sent loads of stuff for publication from people who clearly haven’t bothered to ever look at a copy of the magazine, which... I don’t know, just seems a bit daft – there’s really no point sending a 10,000-word short story set in Manchester to a magazine of London writing whose average article length is about 1,000 words. Sadly, the world is full of people who want to be writers, but who aren’t interested in reading anything anyone else has written – especially if they have to pay for it. (This applies doubly to poets, as should most things.) On the plus side, receiving these missives from an alien mindset can provide a window into a world one didn’t know existed. A year or so ago, for instance, we started getting sent lots of quite explicit sapphic erotica: this was interesting, and occasionally instructive – not so much like looking through a window as through a hole drilled in a shower cubicle - but I’ve still no idea why it happened.

And, in a funny sort of way, I miss it... though I’ve not been able to eat a peach since without blushing.

Which bits of London do you feel the greatest affinity for?

I think it’s impossible to stop thinking of the place you grew up in as ‘home’ – especially if your family has real roots there. You’ll always respond to it on a much deeper level than the place where you just happen to live, as it’s part of what’s made you. It’s analogous to the difference between friends and family, I suppose – you can’t choose the latter, and you can never shake them off, no matter how many different accents you use when you answer the phone. So, for me, the small muddy patch of land either side of the Lea between Bethnal Green (where both my parents lived, and their parents and grandparents before them) and Leytonstone (where I was born) is always going to be special. Especially now that most of it is destined to be covered in rubber matting and smothered with somersaulting Bulgarians. Roll on 2012.

When you yourself turn to smoke, where in London would you like your ashes to be scattered?

I used to say over my ex-girlfriend’s mother, but now she’s an ex, I’m not sure that’s really fair. Besides, she’s in Harrogate, not London. So the obvious answer is over the penalty area in front of the South Stand at Brisbane Road, but I’m not sure you’re allowed to do that any more: also, there’s a risk that Jabo Ibehre would trip over them (small joke only Orient fans will appreciate – hello to the both of you). To be honest, though, setting fire to myself seems a bit of a waste, not to mention ecologically unsound – I’d rather leave my body to science. Perhaps on some sort of plinth in the foyer of the Science Museum – that would be good. I think my rotting could be most instructive to schoolchildren.

Who would you like to see stand in next year's mayoral elections?

At the risk of being dull, I want Ken to stand – and he is, so that’s good. I’m sure he has many faults on a personal level (part of his appeal is that, unlike most politicians, he has occasional flashes of normality), but that’s not relevant: when it comes to public politics, his heart generally seems to be in the right place, as you’d hope of an old socialist, and the thought that we could yet end up with someone like Steven Norris, just because people take against Ken on a personal level, or over some single-issue like the Congestion Charge, or over something that the Evening Standard has fabricated, makes the blood run cold. Which is why it’s no joking matter. Obviously I speak as a public-transport-using low-wage earner living in a one-bedroom flat in Vauxhall, but... politics shouldn’t be for the well-off.