By M@ Last edited 187 months ago
M@ Londonist's Back Passage 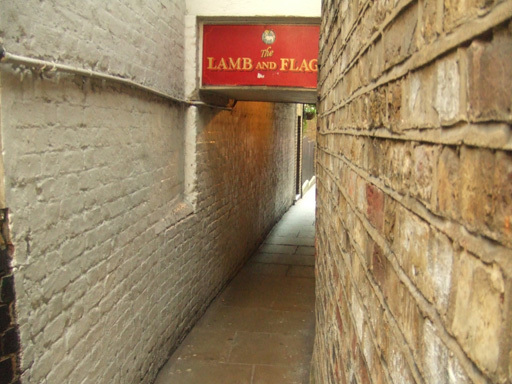 What?Perhaps one of the shortest short-cuts we've yet featured, this alleyway is nevertheless a relative heavyweight historically. The Court was constructed in 1688, becoming one of the first areas to be built upon in this area. It soon gained a reputation as an excellent place to catch cholera, syphillis, or an extreme case of death thanks to the overcrowding and squalor. One notable sampler of the area's unsavoury character was the writer John Dryden, who is said to have been mugged and almost murdered while walking down Lazenby Court. This is probably nonsense though.

Why Use?File this one under the burgeoning catagory of passages with good pubs down them. The Lamb and Flag, although usually too busy to contemplate, is an excellent place for a cheeky half. In darker times, the hostelry was known as the Bucket of Blood. You'd have thought Dryden would have got the hint.

Also Good for?Given the name...topical James Bond tie-ins (we can link anything on this site!).