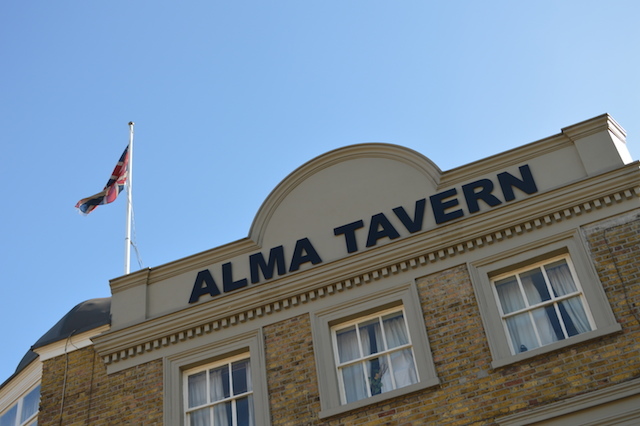 This pub has been voted by our readers as one of the best pubs in Wandsworth.

Directly opposite Wandsworth Town station, The Alma was always going to attract plenty of passing trade, but the sheer magnificence of the place ensures its bustle. Our pub crawl stopped by on a Tuesday night to find all the tables taken, and the dining room full to capacity. Standing room only. A subsequent visit, mid-afternoon on a Thursday, also found a crowd. Don't these people have jobs to do?

The outside is attractive enough — a prominent corner plot is brought to life with green glazed tiling and rooftop dome of this high-Victorian building. Young's have been serving beer here since 1872. The pub recently opened a hotel extension with 23 rooms.

Inside, we find a large O-shaped drinking cavern, converted from the original partitioned Victorian interior. The well-stocked bar at its centre offers a trio of Wells & Young's ales, plus a few from Meantime, and a wine list of some length. We haven't yet tried the food, but the popularity of the dining room speaks for itself.

The name comes from a battle in the Crimean War, and is commemorated in several pubs around London.

Back to all Pubs Back to Wandsworth
Click for Comments