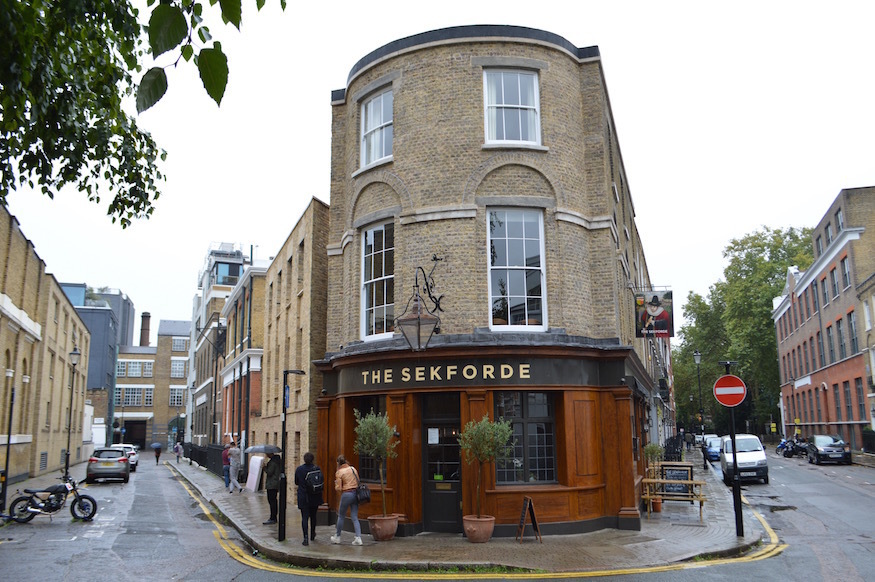 Formerly the Sekforde Arms, this long-standing Clerkenwell favourite has had a major makeover in recent years. So thoroughly has the place been scrubbed and rubbed and remodelled that it even opened for tours during the 2018 Open House weekend — a celebration of London's architecture.

To be fair, the Sekforde has always been a handsome place, as an end-of-terrace wedge-shaped building. The refurb has cleaned off the whitewash to expose more brick, remodelled the basement with some very eccentric features, and even added a guest house by knocking through to the adjoining property.

Despite the upheavals, the bar remains a jolly convivial place to drink, with dark wooden furniture (which actually matches — a rarity in the modern London pub), exposed brick and a central hearth that also serves to separate the two small bar rooms.

The downstairs space really has to be seen, with its striking mural of a country estate and some peculiar species of natural cooling/heating unit in the floor. The pub aims to be the greenest in London, and claims that the installation means it only use 15% of the energy of a conventional pub of the same size. Nice one.

Adding to its credit, the pub also puts on a regular series of lectures tackling 'the most difficult political, moral and scientific subjects of our time'. Add to that a pledge to donate all profits to its own educational charity, and we quite possibly have the most altruistic pub in London.

But does it serve a good pint? Yes. With the tie to Young's a fading memory, the pub now serves up a small but noble selection of ales, as well as catering for wine lovers with bottles from nearby St John's restaurant.

The place has changed radically from the down-to-earth corner boozer of yore, and some may begrudge the gentrification, but we were rather taken with the Sekforde's bold new direction. We'll be back.

Back to all Pubs Back to Clerkenwell