What Is The Lambeth Walk?

By M@ Last edited 62 months ago
M@ What Is The Lambeth Walk?

Any time you’re Lambeth way
Any evening, any day,
You’ll find us all
Doin’ the Lambeth walk

It's a ditty most of us will be familiar with. But where does it come from? How does one do the Lambeth Walk? And what's to be found on the London street known as Lambeth Walk?

The song comes from the 1937 West End musical Me and My Girl, which also introduced the world to The Sun Has Got His Hat On. Both tunes were written by Noel Gay, with words by Douglas Furber and L Arthur Rose. Gay is also the melodic mastermind behind Run, Rabbit Run and Leaning on a Lamp-Post.

The musical proved very popular and, in 1939, became the first to be televised from a theatre, as you can see below.

How does one do the Lambeth Walk?

The Lambeth Walk is an exaggerated rhythmic swagger, with plenty of arm swinging, copious hat-play and elements of slapstick. Like this:

Who else is doing the Lambeth Walk?

The musical was revived in 1984, once again to great acclaim. Its leads were a youthful Emma Thompson and Robert Lindsay:

The Lambeth Walk was also recruited for the war effort. A 1940s propaganda film made fun of the Nazis by setting their goose-stepping to the famous tune:

The mash-up (as we'd probably call it today) was well aimed. A Nazi official had earlier denounced the song and dance craze as 'Jewish mischief and animalistic hopping'. The parody, which was widely seen in cinemas, is said to have enraged Goebbels.

What can one find on the real Lambeth Walk?

The German connection continues to this day — albeit under much more convivial circumstances. Head to the southern end of Lambeth Walk and you'll find the wonderful Jolly Gardeners pub, now trading as a German gastropub called Zeitgeist. It's brilliant.

Once a major high street in the area, much of Lambeth Walk today is a quiet, residential affair. You are unlikely to see any Cockney prancing. Nevertheless, it retains some character.

A set of murals to the southern end provide a colourful history of the area. One features a Lambeth-Walkin' couple ambulating past a hover-conversion market barrow:

Other local vaudevillian heroes are commemorated by Southbank Mosaics. Chaplin lived nearby, and his dad was supposedly a regular piano player at the Jolly Gardeners.

Lambeth Walk Open Space is delightful. We stumbled across a couple of visitors doing the Lambeth Toke, but again no evidence of dancing.

The Lambeth Walk Off Licence, meanwhile, is just a hyphen away from the encouragement of shoplifting.

At the northern end is another pub, appropriately named The Lambeth Walk. Sadly, it's long-closed. 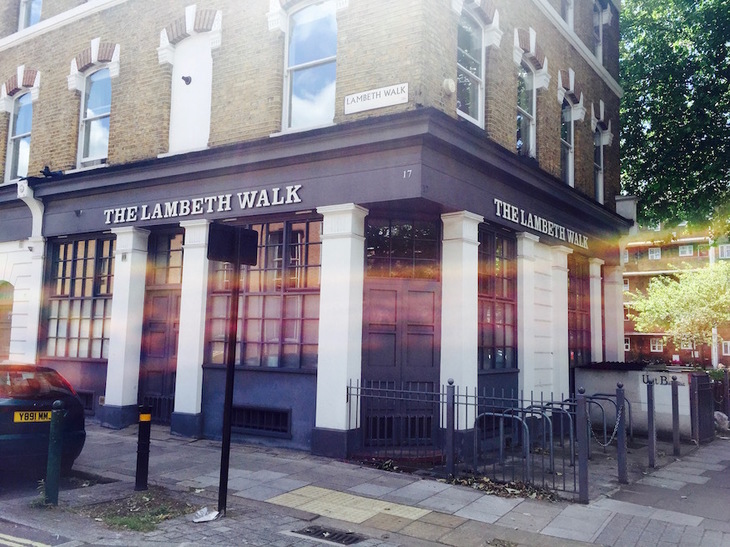 You can find Lambeth Walk, any hour of any day, a short stroll from Lambeth North tube station.