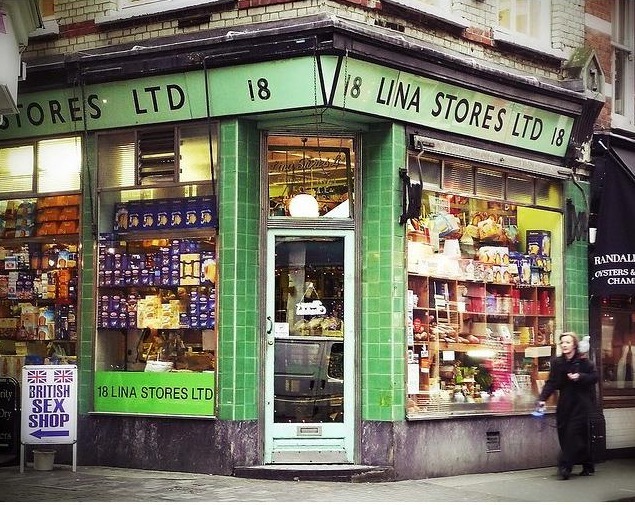 Any roundup of top food shops is likely to change at a moment’s notice, but here's a list of current favourites to reinvigorate your larders.

Update: To clear up confusion, that's north as in 'north of the river'. A second post on places south of the river will follow (possibly with a clearer title). We've focused on central areas (north of the river) as that's the area most people will be familiar with, but welcome suggestions for places further out.

One for the gastro-counter revolutionaries. In a post-Jamie-Oliver world every borough would have a grocer like Leila’s linked directly into small specialist food producers and picking sensible, small-scale delights to cook with. The celery in the boxes outside dwarfs that of Sainsbury’s by nearly half a metre in foliage and stem. The lemons have stalks on. There is an organic meat delivery at the weekend. The jams are possibly the best in the capital. What it does not have, you probably do not need. Go for Poilane bread, pulses, coffee, chocolate…or just to see what has come in this week. Give your larder a treat.
17 Calvert Avenue, E2 7JP

Where to go for a phd in cheese — English and continental, the choice limited only by seasons and carefully tended in its own sliding-door-sealed cool room so the crush of shoppers in the deli and caffe do not alter the temperature. Frenchmen have been known to mutter to each other: "so this is why you like London" — "Oui monsieur, it is". Hard, soft, running, smelly, even three German cheeses, which shows the diligence in finding the best from farms around the EC.
2-6 Moxon Street, W1U 4EW

For every time someone tells you that that Waitrose is better than Tesco is better than Morissons, a visit to the Turkish Food Centre redresses the balance and sanity. Fresh bread is baked hourly, fruit and vegetables almost taste of the sunshine, essentials vary from pasta, soft white cheeses, fat olives, halal lamb, superb sucuk sausages (eat your heart out chorizo) and even Fairy Liquid. Wines are one weakness — cheap but not so cheerful. Great fruit juices instead. From opening as Herbtree in the 1980s, the chain now has 14 other branches in almost a straight line north from Croydon north to Waltham Cross.
89 Ridley Road, E8 2NP

On a first visit, the temptation is to give into the ready made sushi and salads, which are time-marked as four hours from when they are made — a different concept of sell-by-date altogether. In the back, however, is everything required to start cooking Japanese from wakame seaweed to dashi kelp. The premium tofu is a revelation and there are books and, naturally, dozens of sake for the would be Tokyo-ist in you. The online shop delivers too, and has recipes.
14-16 Regent St, SW1Y 4PH

One could make a case that London’s best food market is Borough, although the prices tend to be against that. It has become the Harrods of street markets. East Enders support the improving Broadway Market. But the car park behind Waitrose at Marylebone on Sundays is an exemplary political statement — everything just about arriving from within 100 miles of the capital, two excellent fish stalls, rare bread meats, Romney Marsh lamb, a rolling repertoire of cheeses, flowers, vegetables, all without being rapaciously priced, especially considering the quality all round.  Every Sunday 10am-2pm

It is both tragedy and triumph that Steve Hatt’s legendary small shop on Essex Road is widely hailed as the best fishmonger in London, as the queues at peak times testify. It is almost as if every box of fish is personally known to Mr Hatt and his team of scalers, gutters, filleters and general piscine eviscerators. The smokehouse adds to the repertoire of fresh fish, mostly from the south coasts. If you have forgotten why you like fish, this is the place to start. It is fresh, you see.
88-90 Essex Road, N1 8LU

The prices are Notting Hill, but if you are looking for quality old-style traditional meats across the board then Lidgate is the most reliable resource. The jolly aprons and hats and enthusiasm for ready meals should not deceive you into thinking this is not the most serious butchery operation surviving in the city. Chickens are organic or free range or grain fed or all three and if new season’s lamb or a rib of beef are worth splashing out on then these are the real Mcoy. Lidgate has been going since 1858 — David is the fourth generation — and they don’t seem to like change, although there is an online shop now where you can even buy meat from Prince Charles and Princess Anne’s estates in Gloucestershire.
110 Holland Park Avenue, W11 4UA

Marouf Abouzaki’s empire of Maroush restaurants down the Edgware Road also includes a deli for takeaway, which is usefully open until midnight seven days a week. The salads and mezze take centre stage but there is also fresh fish and an array of Mediterranean salads and fruits. Probably the best late night food in the capital. Open early, too, from 8am.
45-49 Edgware Road, W2 2HZ

Chaos is a word that comes to mind. These two seemingly modest shopfronts burst at the seams with oriental exotics, from orchids to wind-dried sausages. The place to buy ready-made dim sum or replenish with difficult-to-find condiments such as Elephant brand thick soy sauce or a vintner’s-style choice of oyster sauces. Open till 8pm. There is a Greenwich branch at Horn Lane, too, plus they own the biggest restaurant in Scotland — all 600 seats of it in Glasgow.
18-20 Lisle Street WC2H 7BE

Without wanting to split too much of a lasagne's width between the best of the Italian delis (apologies to E Camisa in the next block especially), Linas is perhaps the best-loved for looking the part — even after its refurb — thanks to its fresh pastas hanging down to dry, and choice of salamis. Some people have called it an emporium but it is hardly big enough to earn the moniker. Less is more. Less is fine.
18 Brewer Street W1F 0SH

Written by Drew Smith. Image by Buckaroo Kid in the Londonist Flickr pool.

Feel free to suggest your own favourite places in North London (especially out East, which is under-represented here. We'll have a roundup of South London delights soon.