Things In London That Are The Same Age As The Queen

17 Bruton Street in Mayfair is unusual in carrying two plaques to the same person. It was here, on 21 April 1926, that the future Queen Elizabeth II was born. The royal birth is marked by commemorations from both her silver and diamond jubilees.

1926 was a bumper year not just for the Succession, but also for the future of London. Here, we take a look at some of the other developments from that time.

Claude Friese-Greene captured this remarkable footage of Londoners going about their business, including shots over London Bridge, the Pool of London, Greenwich and Whitehall. Recently restored by the BFI, the film is among the first to show Britain in colour.

Phone kiosks began to appear in 1920, but the familiar K2 phone box made its debut in 1926. Nothing could be more evocative of London than the red phone box. It was designed by Londoner Giles Gilbert Scott, who also gave us Waterloo Bridge, Battersea Power Station and Bankside Power Station (now Tate Modern). Not only that, but Gilbert Scott based the design on another London landmark — the tomb of Sir John Soane in St Pancras Cemetery. Many of the original boxes can still be found around the capital. The oldest in existence is said to be that outside the Royal Academy.

London of the future 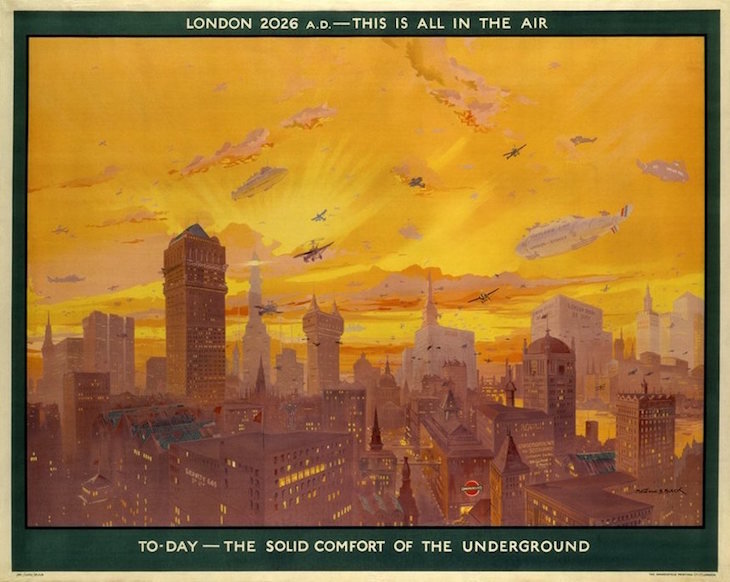 Mighty towers stretch into the clouds, crowding the skyline. Countless aircraft zip among them. Yet the good old London Underground is still open for business. This was a vision of the future city, one hundred years hence, drawn up in 1926 by Montague B Black. If we imagine those aeroplanes to be drones, he probably got close to the truth.

The first public demonstration of television took place above what is now Bar Italia in Soho in 1926. John Logie Baird's contraption wasn't the safest — one bystander had part of his beard lopped off by a spinning disc. The site is today marked by a blue plaque. In parallel developments, the 500,000th telephone in London was this year installed, somewhat belatedly, in the House of Commons press gallery.

Greater even than the Queen (who could dispute?), lifelong Londoner David Attenborough was also born in 1926. Alongside his peerless career as a natural history broadcaster, Attenborough has also had close links with London Zoo, the Royal Institution, the Natural History Museum and Richmond Park.

The capital's first purpose-built mosque opened in Southfields in 1926. The press wondered why it had taken so long in such a cosmopolitan place as London. Woking and Liverpool already contained mosques. A video of the opening can be seen on the BFI's website.

Michael Bond is another London luminary born in 1926. Bond authored the Paddington Bear books, which spawned a popular children's TV show and a recent (and excellent) film. Bond still lives in the Paddington area and is one of the few people commemorated by a statue (in St Mary's Square) in his own lifetime.

The Carry On comedian, also born in 1926, spent his formative years on an estate in Bloomsbury. In this video, he takes the viewer on a tour of his old 'hood.

The oldest surviving Indian restaurant in the country opened its doors in 1926. Veerawamy on Regent Street originally combined Indian and English cuisines, but has long since switched to regional cuisine from the subcontinent.

A new park for London

On 21 May, Minister of Health Neville Chamberlain opened Gunnersbury Park, near Acton. The land had been purchased for the nation from the Rothschild family.