1848 Was The Year Of London's First Electric Light Festival

When would you guess the first electric lights appeared on the streets of London? The date usually given is 1878, when Embankment and Holborn Viaduct were bathed in the glow of arc lamps. But their history goes back further. The electric light was invented in London by Humphry Davy, who gave the first demonstrations in 1806. Decades of tinkering followed. Dozens of inventors filed hundreds of patents, but the technology was slow to make an impact. Then, in the winter of 1848, light burst across the capital in a trio of memorable demonstrations. Welcome to London's first Lumiere festival.

A train of light

Amid the gas lamps, the soot, the steam and the clamour of Paddington station, came a glimmer of the future. A French inventor called M. Le Mott was to demonstrate his new system for lighting steam trains. His apparatus, the size of a sentry box, was strapped to the last carriage of an outbound train. At half-past six, in the late autumn gloom, he threw the switch. A galvanic battery of 60 or 70 cells stirred his lamp into incandescence, amplified by reflectors. The Spectator describes the scene that followed:

A dazzling blaze of light filled the spacious station. The train started, and as it went down the line it was followed by a train of light more than a mile in length, and so bright that no engine could possibly approach it from the rear by mistake. The cone of light, seen from the carriage, was exceedingly beautiful; the borders of it being decomposed by refraction into a prismatic circle of rainbow tints, which rested on the steam clouds left by the engine. It is stated that bridges were visible at distance of two miles by the light; and that a gentleman read a newspaper by it at a distance of two hundred yards.

This was the same railway depicted by Turner just four years before in his famous painting Rain, Steam and Speed (below). His painterly reflections on the march of technology were already out of date, for the iron beasts could now belch light as well as steam. Le Mott's train went as far as Slough, where it shone its beam at Windsor Castle before heading back to London. The inventor assured the press, in an age naive of innuendo, that there "could be no difficulty in keeping it up for the whole of the night". 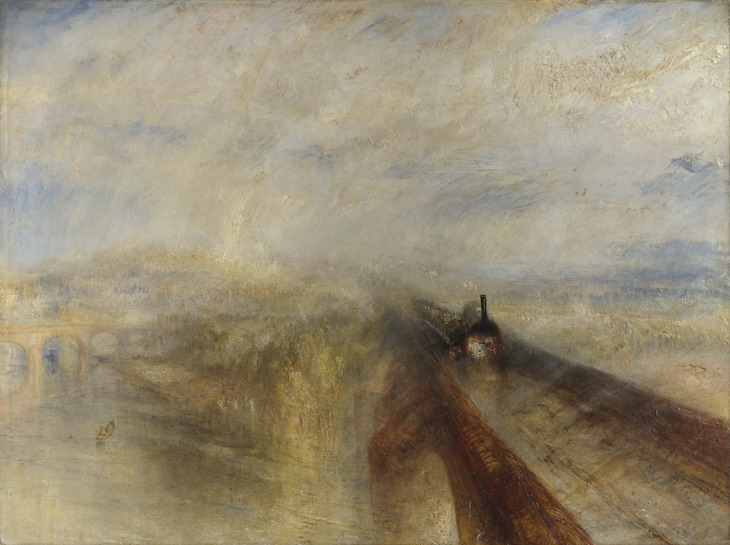 The lighthouse of the West End

Vast crowds gathered in the gas-lit streets of St James's. They waited in drizzle, expecting a dazzle. High above, on the Duke of York's column, an electric light flicked into action.

M. Le Mott was back. Fresh from the success of his Paddington experiment, the radiant adventurer was now poised 100 feet above The Mall. His powerful lamp was positioned on a balcony beneath the feet of the Grand Old Duke of York. The Times described how its beam illuminated the streets below:

The potency and purity of the electric light may be inferred from the circumstance that when cast upon one of the neighbouring club houses, it distinctly showed to spectators, at some considerable distance, the red colour of a shawl worn by a lady in the balcony.

Bystanders watched in awe as the lambent gas lights were deleted by the glare from the Duke of York's lofty perch. It was as though a lighthouse had been positioned in the centre of London.

The coruscating column was the second experiment to bedazzle the area that winter. Two weeks before, another lamp was set up on the steps of the National Gallery by Le Mott's rival, William Staite. Under his beam, the recently opened Trafalgar Square emerged from the gloom. "So brilliant was the light that it was impossible to look at it for a length of time without a dazzling effect upon the eye, and the gas lamps appeared dim and insignificant in comparison," wrote one journalist. Nelson's Column was said to be as "conspicuous as at noonday". In the understated language of the time, the "experiment was satisfactory to all who witnessed it".

Despite these and other experiments, it would be another half century before electric lighting was a common sight on the streets of London. Progress was stymied by the expense and unreliability of the technology, and the lack of a mains supply of electricity. Then, too, there were those who simply disliked the quality of the light, as noted by the Patent Journal a few days after Le Mott's demonstrations.

To the unscientific the dazzling brilliancy of the electric light may appear astonishing, and such its superiority over the gas light will be regarded manifest; but to others... its concentrated dazzling rays are less pleasant to the eye, and less useful for ordinary purposes, than the diffusive agreeable light of gas.

One wit even pre-empted the scourge of light pollution. In a satirical letter to Punch, a correspondent signing himself as a 'gas contractor' bemoaned the "undisguised intention" of electric lighting "to abolish the stars in a twinkling, and take the entire shine out of the moon". The technology would eventually yield a brighter, safer city, but it cost us the stars.