The Guardian wants to "radically re-invent a global progressive media organisation for a new age". What that means on paper is opaque. What it means in bricks and mortar, in glass and tons of heritage steel, is this: 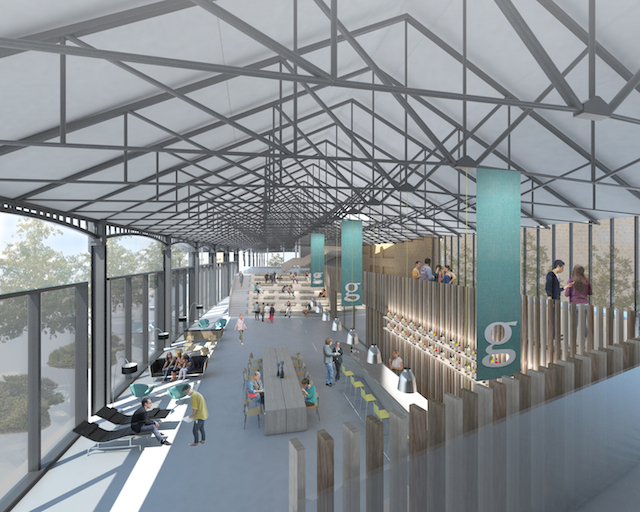 The Guardian Space, due to open in September 2016, will play host to "a diverse mix of masterclasses, debates, workshops, lectures, screenings, receptions and briefings". Audiences of up to 450 will assemble here to learn and mingle, with the requisite bar and restaurant fuelling their discussion.

The new cultural centre will sit just across the road from the Guardian's HQ on York Way, and snuggle up like a fresher's week bedmate to Central St Martin's College, now housed in the neighbouring Granary Building. Its creation will bring to life a semi-derelict set of railway buildings, inaccessible to the general public for a century and a half. These are the Midland Goods Shed (1850), shown in scaffolding to the right of the image below, and the East Handyside Canopy (1888), skulking unseen behind it:


The shed was originally used as a passenger terminus, but soon switched to handling and storing freight goods. Had you walked around it 120 years ago, you might have boggled at the number of potatoes unloading to the adjacent market.

Freight transport to the station was reduced in the latter half of the 20th century and the buildings fell into disrepair. They are now undergoing an impressive and sensitive transformation to the designs of architect Bennetts Associates, providing new space for both the Guardian and Waitrose.

The Guardian section comes in two halves — the bits with missing roofs in the schematic below.


The upper-floor (6 on the map) will serve as a flexible events space. It sports a new pitched roof, with white-painted steelwork that complements other structural elements in the building. Here's how it looks right now:
The cartilaginous roof beams splay out from the original Victorian brickwork. It works rather well. Impressive though this new crown is, it can't match the intricate ribbing of the older roof of the East Handyside Canopy alongside. This (between 4 and 5 on the map) will house a reception area and mezzanine as part of the Guardian Space. Here's how it looks today:
And here's another shot for gratuity's sake:
(A free tip for the Guardian: at your opening event, get the 2016 Olympic gymnastics team to swing from one end to the other, using the horizontal rods as the ultimate set of monkey bars.)

It's not all about the Guardian, though. The other big tenant is Waitrose. The fashionable supermarket is taking the remaining areas of the buildings. Its main space will sit beneath the Guardian's white-beam room (underneath the 6 in the map). It is a bold, industrial space with a riveted frame that could support a battleship.


The room is voluminous, as befits a former railway shed. Nevertheless, Waitrose has had to think carefully about layout. Some sections sit directly above the East Coast mainline, supported on Victorian brick tunnels. Placing something heavy, a wine section for example, over these structures might not be the best idea.

All being well, the supermarket will open in September 2015.

Towards the southern end, a series of breeze block walls demarcate space for a Waitrose cookery school and cafe. The latter will spill out into the Handyside Canopy, which in turn opens onto the route between York Way and Granary Square:


The brick buildings on the left of that shot have been carefully preserved under guidance from English Heritage. These old offices have one of the best views of King's Cross:
The redevelopment is so respectful of the original fabric that only one part looks modern. The eastern edge of the Handyside Canopy has been glazed over, keeping the rhythm of the architecture, but sheltering it from the elements. Here's the view from the outside:
Inside, and throughout the development, original features jostle for attention: old chimney breasts, painted signs, ancient joists. The developers reserve most pride, however, for a hydraulic accumulator tower, a fearsome fist of iron and pressure that once powered the points and signalling. The space around it will serve as a lift lobby.
You can get your first look around in autumn when Waitrose opens. The Guardian's soft launch should take place in early summer next year, with full opening in September 2016.

With thanks to Julian Lipscombe of Bennetts Associates, and ING PR & Communications for the tour.