UPDATE: Greenwich councillors decided to mount a legal challenge to the government's demand that it stops producing its Greenwich Time newspaper, further adding to the costs — funded by the taxpayer — allocated to the publication. The decision was greeted was widespread frustration on Twitter. Resident Neil Clasper said: "Ridiculous use of taxpayers' money. Time to close it down and get your councillors to engage with residents properly." There's an excellent analysis of the paper's history and background on 853blog.

The fate of the Greenwich council-produced newspaper could be decided tonight, when councillors meet [PDF] to discuss a government announcement it must cease publishing or face court action. 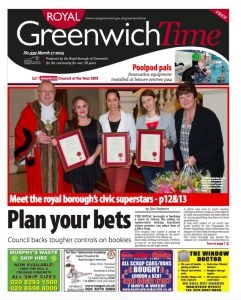 Communities Secretary Eric Pickles has long had council free sheets in his sights — not just in Greenwich, but Tower Hamlets, Enfield, Greenwich, Hackney, Hillingdon, Lambeth, Newham and Waltham Forest. Now local government minister Kris Hopkins has declared the council is banned from publishing more than four issues of Greenwich Time a year, and given it until the end of March to comply.

Hackney, Newham and Waltham Forest have all been given until the end of April to conform with the same order.

The councils have to decide whether to appeal the decision in court or axe the publications. Given Pickles's dogged determination on this matter, if there's an appeal it's likely to be hard-fought on both sides.

The Chartered Institute of Journalists has welcomed the government's action, with the organisation's Cleland Thom saying: "Council newspapers like this harm local newspapers, causing closures and redundancies and damage local democracy.

"They are also a waste of council tax payers’ money at a time of huge cuts in local government spending."