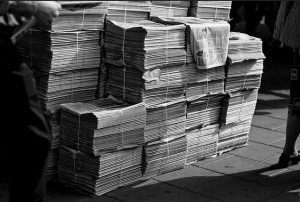 The Department for Communities and Local Government (DCLG) has council-produced freesheets in its sights, announcing last month that it would take action against eight London councils over their publications.

Top of the DCLG's hit list is the Tower Hamlets weekly East End Life, but Enfield, Greenwich, Hackney, Hillingdon, Lambeth, Newham and Waltham Forest are also in the firing line. Outside London, Luton, Medway and North Somerset councils face action too. Trial by Jeory and 853blog have already done very decent write ups of the proposed action over the Tower Hamlets and Greenwich freesheets respectively. You can see the letters to the individual councils here.

Communities secretary Eric Pickles has been pursuing councils over their freesheets since issuing guidelines in March 2011 under the Code of Recommended Practice on Local Authority Publicity. What started as a request that councils restrict publications to four times per year has become a series of escalating demands, culminating in what's basically an instruction to stop now or else. Local Minister Kris Hopkins said:

"Frequent town hall freesheets are not only a waste of taxpayers’ money but they undermine the free press. Localism needs robust and independent scrutiny by the press and public. Councillors and political parties are free to campaign and put out political literature but they should not do so using taxpayers’ money.

"This is the 11th hour for 11 councils who we consider are clearly flouting the Publicity Code. They have all now been given written notice that we are prepared to take further action, should it be necessary, against any council that undermines local democracy — whatever the political colour."

The Chartered Institute of Journalists (CIoJ) has welcomed the move, calling the freesheets 'vanity publishing'. The group estimates that Waltham Forest News has cost the taxpayer upwards of £3m in six years, while Trial by Jeory estimates that East End Life costs in excess of £1.5m per year to produce — yet back in 2012, Tower Hamlets was so short of cash that it planned to sell a Henry Moore sculpture bought from the artist for public display. With councils across London facing swingeing cuts, we think residents would prefer to see the money used for frontline services rather than weekly recycling fodder. Barking and Dagenham axed its fortnightly freesheet (PDF) last year to save money, while Redbridge has produced an app for its freesheet (though it doesn't replace the quarterly magazine).

Arguably, when councils are investing in and developing their own websites, printing and distributing very similar content seems a bit, well, pointless. Though even Boris Johnson isn't immune to a bit of vanity publishing — after criticising Ken Livingstone's 'Pyongyang-style freesheet' The Londoner, he produced his own (albeit not taxpayer-funded) in the run up to the 2012 mayoral elections. Slow handclap for Boris.

The other problem with council freesheets is the impact they have on an already-straitened local free press. While we appreciate that this is just part of a whole larger debate about online news and content, the fact is that coverage of local news in national media is sketchy at best. Crucially, without a free press, there's no-one to hold the local authority to account. That is, unless you're lucky enough to live in an area which contains a dedicated local blogger with the time and inclination to scrutinise the council.

One London borough has already seen its free press disappear — earlier this year, the Fulham and Hammersmith Chronicle closed down. In 2010 it launched a campaign against the council over its freesheet, claiming the H&F News was 'a biased council publication masquerading as an independent newspaper'. The DCLG guidelines state that any local authority publications should be objective and even-handed. Can we trust councils to be objective and transparent in their communication to residents?

The 11 councils have until 9 October to comply with the Publicity Code or demonstrate why they shouldn't need to.

Photo by David Telford in the Londonist Flickr pool.