The Day The FA Toasted Hitler

This striking headline appeared in the syndicated press of 5 December 1935: 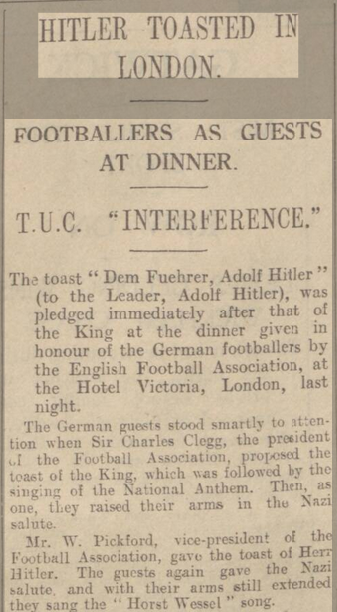 In short, a Football Association dinner with Nazi salutes and a toast to Herr Hitler. It came after England beat Germany 3-0 in a friendly at White Hart Lane, the Swastika flag fluttering in the breeze above Tottenham's ground. Highlights can be seen in this fascinating British Pathe film: "You can always tell a good Nazi by his cap".

The build-up to the match had caused much controversy. The Nazi regime was widely condemned by 1935 for its treatment of Jews and other groups. Many Jews had, indeed, fled to London, and especially to the Tottenham area where the game was to be played. Was it appropriate for a German team and 10,000 of its supporters to visit Britain under such circumstances? Some papers predicted anti-fascist protests, and perhaps counter-protests from British far-right groups.

In the event, the game passed relatively smoothly. Jewish groups and trade union members marched through the area, but behaved peacefully. Seven people were reportedly arrested outside the ground, however, for 'distributing anti-Nazi literature'. On the pitch, the German team gave Nazi salutes, as shown in this still from the Pathe film. The England team did not reciprocate. 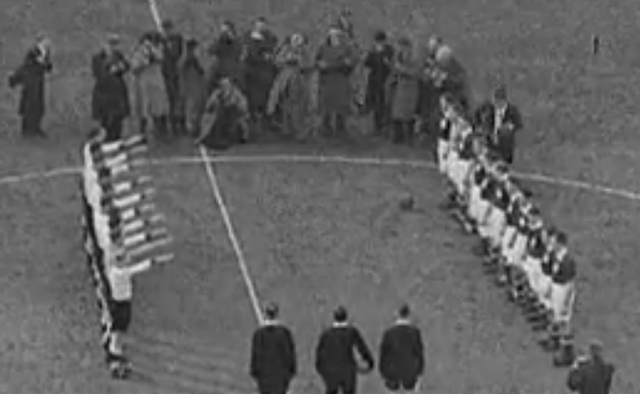 Things were different at the evening meal, however. The head of the FA, Sir Charles Clegg, apologised to the German team for the behaviour of union leaders, who declared the match a propaganda coup for the Nazis. 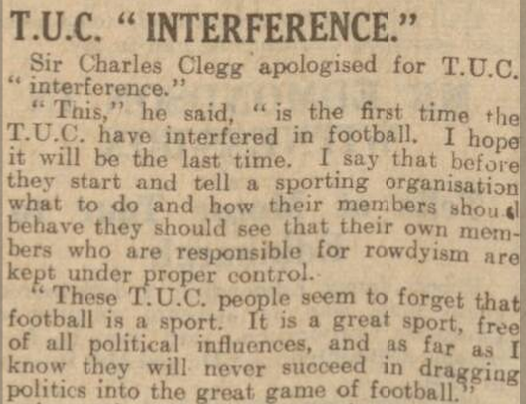 While berating the TUC for bringing politics into sport, the most powerful men in football proposed a toast to Herr Hitler. Presumably, the salutation was in accordance with official protocol, but we can only wonder if anybody in the room spotted the irony.

The game was followed, in May 1938 with an even more controversial tie, played on German soil. This time, politics was intricately commingled with sport, with the England team ordered to give a Nazi salute as part of Neville Chamberlain's policy of appeasement. The gesture naturally caused uproar, coming just two months after the German annexation of Austria.

With the benefit of hindsight, such respect to Hitler's regime seems jarring, but the political environment of the day was complex, protean and nuanced. Perhaps the most peculiar instance came in April 1936, at the funeral of Germany's ambassador to Britain, Leopold von Hoesch. The cortege paraded a Swastika-draped coffin through central London, escorted by a royal guard. The late ambassador was even afforded a 19-gun salute:

Von Hoesch — no fan of Hitler — is remembered today among London trivia fans for the singular monument to his dog. The tacky, kennel-shaped grave to Giro can be found next to the Duke of York's column, overlooking The Mall. 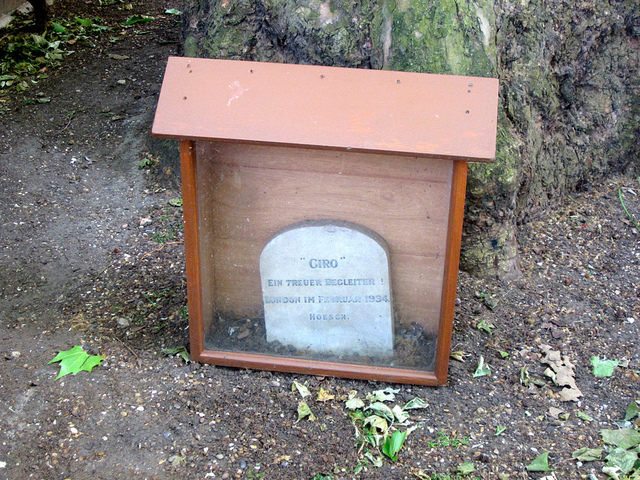 Newspaper cuttings from the British Newspaper Archive. Giro photo by the author.