Dave Lewis casts an eye over 10 London landmarks where the band forged their legacy in the capital.

On 19 August 1968 the four members of the band that would become Led Zeppelin met up in Chinatown for their debut rehearsal. The actual location has never been clarified but it’s likely to have either been at 39 Gerrard Street in a basement on the site of the Westminster office of the original Penny Post (a plaque was placed on the building in April 2008 to commemorate this distinction).

This was also the site of the original Ronnie Scott’s Jazz Club before it relocated to Frith Street in the mid-60s. The other possible location is a basement at 27 Lisle Street which runs parallel to Gerrard Street.  This housed a popular record shop called Transat Imports which specialised in soul, and rhythm and blues.

A former theatre and cinema, the Olympia building in Barnes was renovated as a recording studio in 1966. It quickly became a much sought-after studio location with The Rolling Stones, Beatles and Jimi Hendrix among its clients. In October 1968 the first Led Zeppelin album was recorded there in just over 30 hours. Zep went on to record subsequent albums at the studio, notably Led Zeppelin III, Houses of The Holy and Physical Graffiti. It’s now reverted to being a cinema and during the past 12 months lead guitarist Jimmy Page has used the premises to stage media-only playbacks of the reissued Zep albums.

A former railway engine shed and warehouse in Chalk Farm, The Roundhouse became a concert venue in the mid-60s. The large circular building played host to one of the first London appearances by Led Zeppelin on 9 November 1968, when they were billed as 'Yardbirds now known as Led Zeppelin'. The support bill included blues legend John Lee Hooker. Admission fee was 16 shillings for members and 26 shillings for guests. Their performance fee was £150. Earlier in the day Robert Plant had married his girlfriend Maureen Wilson. More recently, Plant performed at the venue in 2010 and 2014.

In early December 1968, the four members of Led Zeppelin casually posed in front of a Jaguar car for a group photo taken outside the offices of the Impact Agency located on Windmill Street, just off Tottenham Court Road. Photographer Dick Barnatt recalls: "As they walked outside the office into the street there was a Jaguar car parked right outside. In those days there was little restriction to parking in side roads in central London. I suggested a group shot against the car and they agreed. I shot three photos in quick succession. One had a Royal Mail van going by, the other a Mini and the final one was clear of traffic. And that was it. The boys left. I took the film into the lab downstairs and the prints and contacts went back off to Atlantic Records. This photo session has gone on to become one of the iconic off-stage images of the group."

Around the same time as the above photo shoot, Led Zeppelin played their second date at London’s prestigious Marquee Club — then situated at 90 Wardour Street. This was their second visit to the club and for this show they were billed as 'Led Zeppelin (nee The Yardbirds)'. In one of the first live reviews of the band, Tony Wilson reported in Melody Maker that "Led Zepplin [sic], the re-grouped Yardbirds, made their Marquee début last week. They are now very much a heavy group, and generally there appears to be a need for Led Zeppelin to cut down on volume a bit". The Marquee Club relocated to Charing Cross Road in the 90s, and eventually closed in 1996.

The famous South Kensington landmark first hosted Led Zeppelin on 29 June 1969 as part of the Pop Proms series of concerts. On that occasion they were supported by Blodwyn Pig and The Liverpool Scene. Six months later on 9 January 1970 (the night of Jimmy Page’s 26th birthday) they were back — this time with no support acts, such was their growing status and reputation. This much-acclaimed concert was filmed at the time and years later restored and released on the 2003 Led Zeppelin DVD. In 2002, Page and Plant returned to the venue to perform separately on the bill of a Teenage Charity show headlined by Paul Weller. 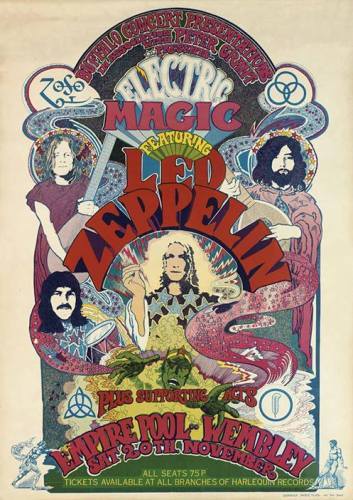 In November 1971, ever on the look-out for new locations, Zep took over the Empire Pool, Wembley, for two nights. The venue had operated since the 1930s as a swimming pool and ice rink. The line-up included circus variety acts such as plate-spinners and performing pigs. These five-hour extravaganzas were billed as Electric Magic. Posters that were sold as souvenirs on the nights for 30p can now fetch a four-figure sum if in excellent condition. The Empire Pool would later be renamed Wembley Arena (today re-branded the SSE Arena, Wembley).

Zep took to the heights of Muswell Hill for a pair of Christmas concerts in 1972. Originally opened in 1873, the Alexandra Palace building housed the BBC in the early days of television. Ally Pally was damaged by fire twice — once, just 16 days after first opening, and again in 1980. The venue was the scene of the famous 14 Hour Technicolour Dream benefit event staged in April 1967, featuring The Pretty Things and Pink Floyd.

This was the location for the modest offices of Led Zeppelin’s record and management company, Swan Song — situated at the less fashionable end of Kings Road. Their fellow acts included Bad Company, Maggie Bell, Dave Edmunds and The Pretty Things. The building also acted as the HQ of the British Legion.

After gaining a reputation as the home of consumer exhibitions, in the mid 70s Earl's Court began being used as a concert venue. Following appearances by David Bowie, Slade and Pink Floyd, in May 1975 Led Zeppelin performed five sold out shows at the venue. It provided the platform for them to perform material from their newly released Physical Graffiti double album. "Statistics are always misleading," wrote Tony Palmer in The Observer at the time. "With Zeppelin statistics are irrelevant — except they are truly astonishing. No pop group in history, no entertainer, no opera singer has ever attracted such an audience." These Earls Court shows are generally perceived as some of the band’s finest.

Dave Lewis is the editor of the Led Zeppelin magazine Tight But Loose.