London tour guides usually entreat us to look up. This time, we urge you to look down. The capital's manhole covers act as reminders of London’s time of cholera, of trams and even of Roman London. Here, Laurence Scales lifts the lid on hidden depths of the city's history.

London has many manhole covers from Thomas Crapper (1836-1910), the curiously-named Victorian purveyor of sanitary ware. A great self-publicist, he contributed little to the technology except that in testing his water closets he took care that the more obstinately buoyant deposits did not make an unwelcome return. We understand that people pay a premium to make rubbings of the Crapper covers at Westminster Abbey but the keen observer can find many other examples in London’s back passages.

The residue of dinner, once successfully put behind us, can cause a build up of explosive methane in the sewers unless they are ventilated. Following experiments at Thornton Hill in Wimbledon, the impressively-moustachioed late Victorian civil engineer William Santo Crimp (1853-1901) was responsible for adding stink pipes to our street furniture. The swifter air movement overhead dispersed noxious gases more effectively and less offensively than gratings on the ground. This is a grating at ground level which he appears to have signed.

This George Jennings lid, rather reminiscent of Hello Kitty, dates from around 1899. Alas, company founder George died in 1882. Jennings was the entrepreneur who introduced the general public in large numbers to the comforts of the water closet when they visited the Great Exhibition of 1851 in Hyde Park. The popularity of the new gadget overwhelmed the primitive London sewer system and led to the Great Stink of 1858.

The most intact remains of the Roman amphitheatre under the City of London Guildhall are its drains, at least 1,700 years old. As with a modern drain this one opens out at one point into a chamber where it was intended that silt and leaves would settle which might otherwise block the flow. It has a wooden lining. Here it is under a modern glass floor. But the existence, originally, of a wooden or stone manhole cover we may surmise.

Before a civilised system of sewers was developed and before the cause of diseases was known Dr John Snow (1813-1858) had a hunch that water was involved and compared the death rates in the districts supplied by the Lambeth and the Southwark & Vauxhall (S&V) companies during an outbreak of cholera in 1849. They were similar. In 1854 the S&V continued to draw water from the fetid and faecally-charged Thames in central London. Snow found that the death rate was nine times greater than for the Lambeth company which, by then, piped water from the upstream arcadia of Surbiton. This cover probably dates from around 1900.

Most trunk routes in London used to be paved with wood, and wood persisted into the 1950s. It was less noisy and less slippery for horses than stone, metal and tar. But the tendency of spongy soft woods to soak up horse pee and then squirt it out under the pressure of heavy wagons contributed to the stench of the city. In many manhole covers of this design the wood has rotted and been filled with asphalt. But not here. 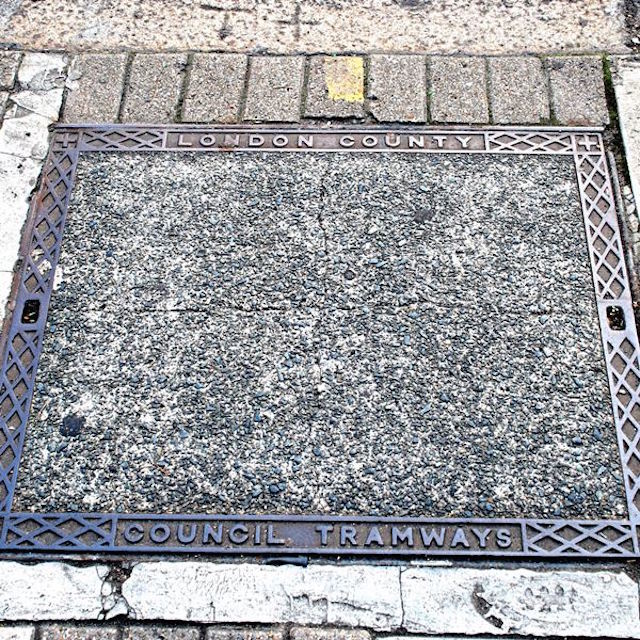 This is a relic in Lambeth of the London County Council tram system (1899-1933). LCC trams were unusual in picking up the electric current through a slot in the road using a ‘plough’, instead of from overhead wires.

When electricity networks were introduced in the late 19th century the expected use of the supply was for lighting. Toasters, irons and curling tongs followed. Numerous private electricity companies sprang up. London manholes reflect this diversity. In Islington current was supplied by an enterprising parish council.

OMG! The electric telegraph is still widely imprinted on London's streets. It was a hub-to-hub text message system with no exchanges to route messages. Final distribution of telegraph messages on paper was done by hand or perhaps vacuum tube. Telegraph offices were an early employer of women though, apparently, they were spared the 'vulgarity' of dealing with foreign traffic. The end-user to end-user telex system for text was developed in the UK from 1932.

London’s palaces, churches and railway stations have protection. Manhole covers are among its beauty marks, not its pimples. It would be sad if, through inattention, these relics disappear.

All photos by Laurence Scales (@LWalksLondon)