Where Should The Cable Car Be Moved To?

By BethPH Last edited 94 months ago
BethPH Where Should The Cable Car Be Moved To? 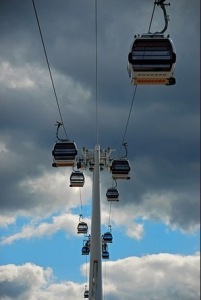 Now that the Emirates Airline cable car has no regular commuters, the London Assembly Green Party has suggested in a press release that it be moved to a location where more people would use it.

We reported in July that numbers of people using the cable car had continued to fall — 853blog said in 2013 there were just four regular commuters but this has now dropped to a big fat zero. The Green Party's Darren Johnson said:

“These shocking figures go to show that the cable car was built in the wrong place and its ticketing policy is simply not fit for purpose. TfL should explore whether it could move the cable car to somewhere more useful.

The Mayor as head of TfL has the power to step in and turn the cable car’s fortunes around and the easiest way to plug the black hole in its finances would be to simply get more passengers through the turnstiles."

This got us wondering where the cable car would be most useful. Between City Hall and Tower Hill would offer some spectacular views for tourists, while London Bridge to Upper Thames Street would provide a helpful alternative for commuters while the upgrade work is going on at the station.

Update: We threw this question out to Londonist readers and got a fantastic response — it seems a lot of you would like to see the cable car moved. The most popular suggestion was Canary Wharf to Rotherhithe, not least to provide a way off the island when the Jubilee line and DLR fail. Lots of you wanted it to go from London Bridge and Waterloo to various places, including Monument, Tower Hill, Cannon Street and Canary Wharf.

Only a couple of you wanted it to go from your home to your workplace which would be great until you move house or change jobs. Less positive suggestions were the bin and the nearest scrapyard. The Middle East appears to be a popular destination too, with Dubai, the UAE and Qatar singled out. Also outside of London: France, Switzerland, Sheffield, Snowdonia and 'Up North'. Parks, the London Zoo and the Cutty Sark were suggested too.

Among our favourites were the location-specific Gunners Pub to the Emirates Stadium, Debden to St James' Park, Boris Johnson's house, the House of Commons to the bottom of the Thames and Victoria Park to Mare Street. We suspect some self-interest. A couple of you even wanted it left where it is.

Finally, kudos to Brian Butterworth in the comments below for actually mapping out a route which connects Canonbury, Forest Gate, Kidbrooke and Tulse Hill with Canary Wharf — we admire the extent of your vision.

Photo by Richard Watkins in the Londonist Flickr pool.