The (Old) Isle Of Dogs From A To Z 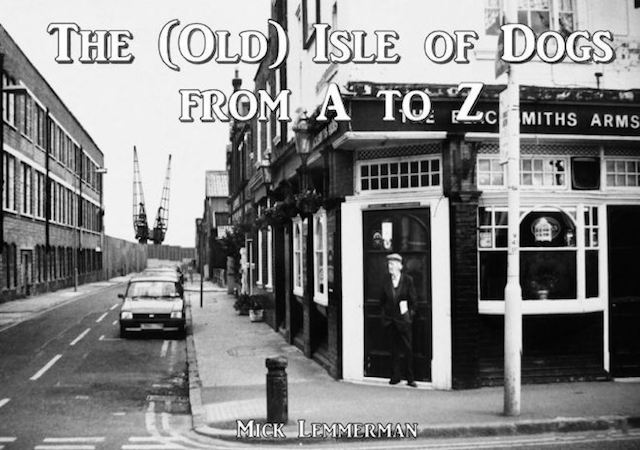 Mick Lemmerman is the compiler of the Isle of Dogs: Past Life, Past Lives blog, a splendid resource on the history of that area. He hit upon the notion of listing out an A to Z of old Island places that have disappeared or are disappearing. In a landscape as protean as the Isle of Dogs, he's dug up so many golden bones that they've overspilled the website and found their way into a book. Here he shares with us a few of his favourite local nuggets from The (Old) Isle of Dogs From A to Z.

B: Tragedy at Bullivant’s Wharf

A wharf belonging to Bullivant & Co, close to the original St Luke’s School on Westferry Road. Tragedy occurred on 19 March 1941 when an air raid shelter on the wharf received a direct hit during bombing. More than 40 people were killed and 60 injured. The event is commemorated by a plaque on the Thames Path. Here's a photo of the plaque. It was unveiled in summer 2014. I wrote the text, but it was a certain Keith Woods who drove the whole initiative to have a memorial.

C: How Canary Wharf got its name

The northernmost of the West India Docks was the Import Dock. It was one of the largest docks, but its curved walls (i.e. curved below the water surface) prevented ships with deep draughts from mooring alongside. With increasing ship sizes, this was a problem as early as the late 1900s. The dock company’s solution was to build ‘false’ quays, which extended out from the stone quay sides. These false quays had to be continually enlarged to keep up with ship sizes and, in 1937, a 580ft-long false quay was built on the Import Dock’s south quay. It was named Canary Wharf. The wharf was given this name at the request of Fruit Lines Ltd, subsidiary of the Norwegian Fred Olsen & Co, because it was leased by them for the unloading of their ships bringing fruit from the Canary Islands. (An interesting coincidence — well-known but worth repeating — is that the Canary Islands are named from the Latin Islas Canarias, which in English is Islands of the Dogs.)

F: Ferry House, the oldest pub in the Isle of Dogs

In 1700, the ferry to Greenwich departed from an area which was not much more than farmland. There was a starch factory near the ferry landing, and when this closed around 1740, the premises were rebuilt to become the Ferry House pub — probably serving refreshments to ferry passengers. The present Ferry House was built in 1822, making it certainly the oldest (still existing) pub on the Island, and one of the oldest buildings.

The George opened in 1865, and was rebuilt in 1932. The original building was erected in 1864-5 by George Read, who was also responsible for 57 houses in Glengall Grove. I like this entry for two reasons (a) the pub is still doing business (amazing for the Island), and (b) it was visited by American actress Jayne Mansfield. I got the photo from the granddaughter of the pub landlady at the time, there on the left, with her hand on Mansfield's hip.

The club was first known as Millwall Rovers when it was started in 1885 by workers from Morton’s factory and when its club house was in the Islanders pub in Tooke Street. The team proceeded to inhabit four grounds on the Island, changing its name to Millwall Athletic at one stage, before moving to New Cross in 1910. Its Island grounds were located at (a) waste ground off Tiller Road (modern name), (b) behind the Lord Nelson pub, where Manchester Grove now is, (c) an athletics ground on the site of the present-day Asda, and (d) in Millwall Park, on the site of the future George Green’s school playing field.

St Paul's Presbyterian church — opened in 1860 specifically for the many Scottish workers who had migrated to the Island — was designed to look like the west front of Pisa Cathedral. The resemblance is very clear. Today, St Paul's is the performing Arts Centre, 'The Space' (whose Hubbub bar was voted one of the best pubs on the Isle of Dogs by Londonist readers).

Mick Lemmerman's The (Old) Isle of Dogs From A to Z was published in 2014.