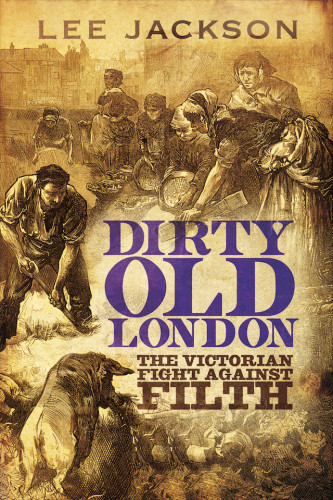 Where there's muck there's brass. Let's hope so for Lee Jackson, author of this volume on all things feculent, filthy and noisome in the Victorian city. It's a big topic that deserves a big audience.

The publisher clearly has a sense of humour. Remove the dust jacket and the underlying hardback is a turdy shade of brown. Nothing crappy about the writing here, though. Lee's style is well-pitched between scholarly and populist; neither bogged down in detail, nor rolling around in 'horrible histories' sensationalism. That said, there are a few stomach-churning incidents you won't forget. Whether it's the gory liquids of an overloaded burial ground or the cess and incest of a pauper's hovel, this is a book that will make you want to lick out your toilet bowl in appreciation of modern sanitation.

Perhaps the biggest revelation is the politics of poop. Improvements to the woefully inadequate sewer network and other sanitary challenges were repeatedly held up by all manner of narrow-mindedness, bumbledom, ignorance, vested interests and — on the public's part — refusal to pay the necessary taxes. Elderly statesmen whose job it was to decide on such matters, "could not even contemplate women's toilets without bursts of juvenile laughter and ridicule".

The author has made some very welcome editorial decisions. A book like this could have easily filled its waders with a detailed study of Joseph Bazalgette's sewers or John Snow's investigations into cholera and drinking water. These two tales are of supreme importance to the history of public health in London, but the literary latrine already overfloweth with their exposition. Jackson does mention these landmark interventions, of course, but expends his efforts elsewhere. Chapters include the menace of soot, the fight for adequate drainage, the challenges of burial in a rapidly growing city, and the Victorian take on personal hygiene.

Another clear editorial choice is to root the book firmly in the 19th century city (the author's long-established forte). This does leave the reader wondering 'what happened next?'. Where did all that soot go? When did people start washing daily? A longer epilogue, briefly sketching out the reforms of the 20th century might have been useful. Then again, if you're going to lay down one single, well-rounded log, you don't really want to follow on with a chain of minor plops.

Dirty Old London: The Victorian Fight Against Filth by Lee Jackson is out now from Yale University Press (of all people). Buy from one of these independent London book shops.

Looking for other books about London? Check through our archive of other recent titles.