Single Homeless Are At The Back Of The Housing Queue 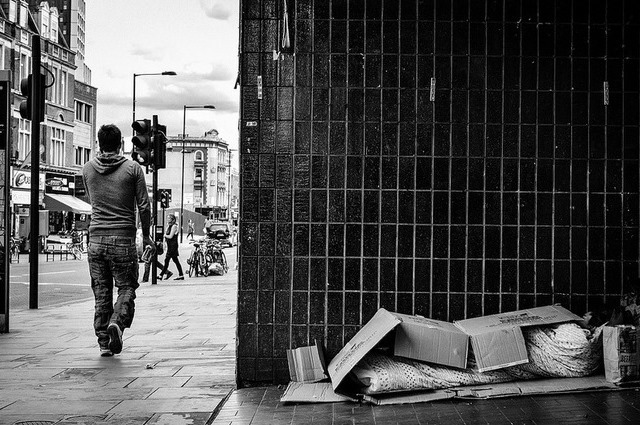 A report released today by homelessness charity Crisis has revealed that single people are receiving little or no help from local authorities when seeking emergency accommodation.

The No One Turned Away report used eight mystery shoppers to visit 87 local authorities across England, including 29 in London, to find out what kind of advice and assistance is provided to single homeless people. Turns out that it's rather lacking, even where the mystery shopper presented themselves as a victim of domestic violence or a young person thrown out of the family home.

With the squeeze on London's housing becoming ever tighter, councils have to prioritise, and families with children or the disabled come higher up on the list than single homeless people. It's not a question of who is the most 'deserving' of help, but councils trying to allocate their meagre means in whatever way they can. But under the 1996 Housing Act, local authorities are required to offer assessments, advice and assistance to people who aren't considered a priority, and it's here that the Crisis report highlights councils' failings.

In all 29 of the London mystery shopper visits, the councils failed to provide adequate assessments for two reasons — the homeless person would not be allowed to see a housing advisor because they were not in priority need, and they could not be assessed without providing ID and proof that they were homeless. One mystery shopper claiming to have been the victim of domestic violence said:

“I was told that if I did not have a letter from my dad saying that I was homeless they would not proceed with an interview or provide me with information and assistance as I could not prove I was homeless.”

As it's pretty unlikely that a domestic abuser will thoughtfully supply a letter to their victim to enable them to be rehoused, this appears to be nothing more than a tactic to get rid of people seeking help. Other mystery shoppers also reported a lack of empathy from staff, excessively long waiting times, incorrect advice, lack of privacy, 'intimidating' security guards and CCTV, as well as being forced to discuss their situation in front of other clients. Although there's no requirement in law for people to provide the kind of documentation demanded by councils prior to assessment, it's part of a practice known as 'gatekeeping', effectively deterring homeless people from receiving the assistance they need. Even when the shopper stated they had nowhere to sleep that night, they were told the council had no duty to help. We looked at some of the reasons for rough sleeping in July.

Crisis has called on local authorities to do more to improve how they handle homeless people seeking help and advice with further recommendations:

The organisation has also called on the government to enforce its own legislation, provide adequate funding and improve collection of data on homelessness. The Mayor of London's No Second Night Out (NSNO) programme has been gathering data on homelessness and rough sleeping, and we took a closer look at this last year.

You can read the Crisis report in full here.

Photo by Thomas Thorstensson in the Londonist Flickr pool.