Why Has The Number Of People Rough Sleeping Been Rising? 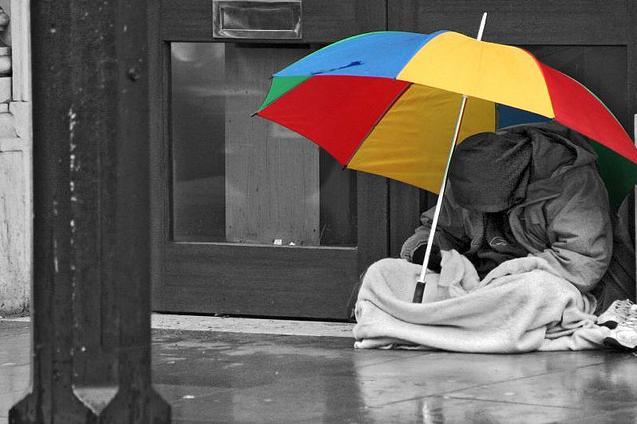 When it comes to the numbers of people sleeping rough in London, the numbers don't look good. Back in summer, figures were released showing that 6,437 people slept rough in 2012, compared with 5,678 in 2011. If you're on Twitter, you may also have seen a Private Eye chart that was doing the rounds, comparing Boris Johnson's pledge to end rough sleeping by the end of 2012 and a massive increase in rough sleepers during his Mayoralty.

We were curious about what was causing this increase, so we rang Broadway London, the charity that manages the Mayor's No Second Night Out (NSNO) programme. NSNO aims to reach people as soon as they've arrived on the streets so they don't have to spend – as it says – a second night out. We spoke to Petra Salva, the NSNO director.

The first thing we want to know: what's behind the rise in rough sleepers? The economy? Benefit caps? "Actually, the rise in people recorded and seen is down to a change in practice," Petra explains. "No Second Night Out began in April 2011. We changed how we deal with new arrivals on the street, we got to people more quickly. We have a rapid response. There's a phone line for people to report rough sleepers – identifying, not criminalising," she's at pains to point out. "Then an outreach team can get to them. No Second Night Out changed how they work, too. Some teams were working Monday to Friday, now they have seven day a week rotas. New rough sleepers are entered on a database within one hour of being seen and we have 24/7 referral centres where people can be brought immediately."

Look again at the figures, particularly that Private Eye graph. There is a gentle rise between 2008 and around 2011, which we can probably pin on the recession (we'll come to that later) but the most dramatic rise comes in 2011, just when No Second Night Out started and was able to reach, record (and more importantly) help more rough sleepers than before. It's not that there are suddenly thousands more people sleeping rough, it's that they're being more accurately recorded for the first time.

Petra goes on to say why it's important to reach rough sleepers quickly. "It doesn't take someone long to get used to street living. Transitioning to 'normal' living is harder once you're used to a lack of responsibility, and drink and drugs." (We'd recommend reading Charlie Carroll's book No Fixed Abode; a fairly middle class married teacher, he lived rough for a few weeks as an experiment and found it increasingly hard to go back to his old life.)

Petra continues: "You hear a lot about 'lifestyle choice'. But in 20 years of doing this job I've only met one long-term rough sleeper who, after receiving help for mental and physical problems, addiction, whatever they need, didn't look back and say 'that wasn't me'. There's a man in London now, he's only 30 years old and he's been sleeping rough for 10 years. His clothes look like they're part of him. He sleeps on a bed of bottles, food wrappers, mud and twigs, hidden away. He has no friends, no support. He's been of concern to outreach workers for many years, particularly about his mental health. There have been attempts to have him sectioned but he's articulate, and convinces the magistrate that it's a lifestyle choice. People who live on the streets will die on the streets. Anyone who says this is a 'lifestyle choice' is completely barmy."

So the aim of NSNO is to reach people before they acclimatise to living on the street and to get them to a point where they won't return, through advocacy services, education around how to access housing and reconnecting with local support networks and services. By far the largest proportion of people recorded sleeping rough are those who have never slept rough before (68% in 2012-13). 75% of that group were only seen once, compared to 70% in 2011-12 and 63% in 2010-11. Of all the people seen rough sleeping in 2012-13, 62% were seen just once. (For all figures, see the Combined Homelessness and Information Network (CHAIN) report for 2012-13, PDF.)

So is the rise just down to a change in statistics? Not entirely. There's been a significant increase in the number of people from Central and Eastern Europe living on London's streets (28%; after 47% from the UK, they are the biggest nationality bloc) and have increased the total number of rough sleepers, rather than displaced or replaced. Petra says some of this is down to the economy. "Some of the Central and Eastern Europeans weren't prepared for the realities of living here, the competitiveness of the market, the language barrier, cultural differences, the regulatory requirements of working."

She describes how many from the CEE were pushed out of work and have been banding together, squatting in empty buildings and making them liveable; but then the squats become illegal or burn down or something else happens, and there's the shock at finding themselves on the street. Then these groups can attract people who are simply running away, or organised criminals, and they're presenting entirely new challenges for teams like NSNO.

It seems utterly counterintuitive to say that a rise in recorded rough sleepers is a success, but in a way the figures are evidence of NSNO doing its job and reaching more people. The programme is funded through City Hall and has, by and large, been protected from the worst budget cuts. While the Mayor's promise of ending rough sleeping by the end of 2012 was an unfulfillable promise, one of his grand rhetorical gestures rather than having a base in reality, No Second Night Out is something that actually seems to be working.