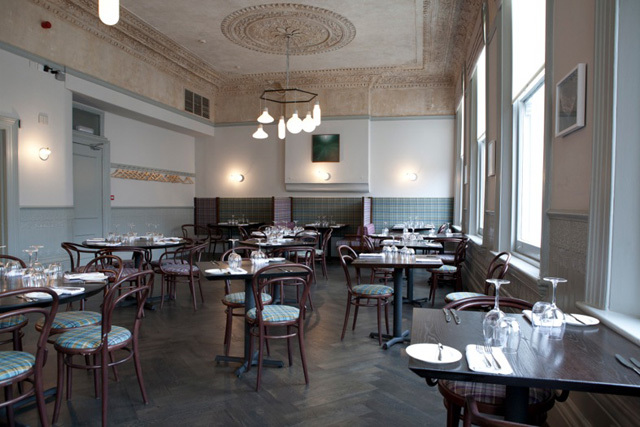 Since its launch in Spring last year, The Truscott Arms pub and dining room has become a big player in leafy Maida Vale. Indeed, everything about it is pretty sizeable, from its imposing Victorian facade to its three floors of eating and drinking space, to its lofty aspirations in hiring chefs from Michelin backgrounds.

But while it's had no problem filling its pubby parts from the outset — thanks in part to a pretty impressive catch-all line-up of ales, wines, spirits and cocktails — its upstairs dining space has proved trickier. Specially-themed dinners, one-off events and functions have kept it busy, but it’s struggled to become a destination in its own right.

With the appointment a little over a month ago of a new head chef and a more strongly segregated divide between the downstairs drinking space and the upstairs dining room, we reckon this could be about to change.

The chef in question is Irishman Aidan McGee, who has previously worked at Michelin-starred Launceston Place off Gloucester Road and Heston Blumenthal’s two Michelin-starred Dinner in Knightsbridge.

He’s put together a classy collection of dishes strongly based around the best of seasonal ingredients, in which clever combinations and precise cooking are the winning features.

Tender breast of wood pigeon is laid over celeriac purée and served with sweet roasted onions and sharp blackberries, then drizzled with a sticky, lightly-spiced reduced pigeon gravy. It’s intricate but hearty, pleasingly robust and tastes like autumn.

Scallops are paired with a chunk of meltingly soft suckling pig shoulder, lemony wild sorrel leaves and cauliflower in various forms: namely puréed, roasted and ever so slightly foamed. It’s creamy, silky-flavoured and excitingly textured; the scallops are lightly cooked and shudder sexily on the plate.

A slow-cooked beef rib is a stand-out. It’s soft and juicy enough to resemble an upright stew, and its earthy flavour is given further depth by a mash of smoked potatoes. If this dish were a person, it would be a distinguished older gentleman; if it were a tube line it would be the Bakerloo. It blows the much-praised beef rib dish at Chiltern Firehouse right out of the water.

Restrained mains can often lead accomplished chefs to go wild when it comes to desserts. A simple rice pudding with mixed spice ice-cream does the opposite here, and it’s a fine way to round things off.

Aidan McGee is a talent to watch and a name we’ll soon be hearing more of. The Truscott Arms is a place to eat before word gets out, stars are won, tables become hot property and prices rise. The menu is currently £34 for three courses and £29 for two, which is very good value considering the quality.

It’s not perfect. The high-ceilinged space is elegant, but feels empty at all but full-capacity. A complete lack of background music compounds this. Staff are enthusiastic, knowledgeable and friendly, but seem a little out of their depth in formal restaurant mode. The wine list, though very sturdy by pub standards, also needs to up its game to match the quality of the food. But these are small things which can be easily ironed out.

Also worth noting is the pub’s excellence in catering for those who can’t eat gluten. The menu is clearly labeled, the vast majority of dishes are suitable, and there’s even gluten-free beer.

The Sunday roast here was also recently voted the UK’s best. No mean feat, but that’s another story which we’ll tell at another time as we’ll be trying it out ourselves shortly.