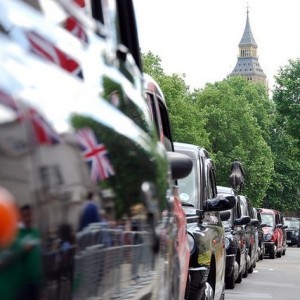 The company behind the controversial Uber cab application has been issued with a temporary injunction after a Frankfurt court ruled against it over licencing concerns.

The smartphone app allows passengers to call a cab and instead of using a meter, calculates the fare en route. London's taxi drivers argue that it's unfair competition and staged a protest in June which saw gridlock around Parliament Square and Trafalgar Square. However heartened London's cabbies might be about the German ban, it's unlikely to be permanent — though Uber risk heavy fines if it flouts it.

Transport for London (TfL) dismissed the claim by the Licensed Taxi Drivers Association (LTDA) that Uber is operating unlawfully. TfL's subsequent attempt to get a High Court ruling has been delayed — by the LTDA taking its own legal action against individual Uber drivers. While clearly unwilling to be drawn ahead of any High Court ruling, Boris Johnson did at least come off the fence to describe the company as 'excessively bumptious' last month.

Meanwhile, Uber continues its war of attrition with London cabbies by launching a cab-sharing app and cutting its prices by 15%. Both of these mean that some journeys could be cheaper than peak tube fares.

Photo by bonneville kid in the Londonist Flickr pool.