There couldn’t be a more fitting way for Southwark’s Menier Chocolate Factory to celebrate its 10th birthday this year than with a run of Fully Committed, the show which first put the theatre on the map back in 2004.

All those years ago, the one-man show based around out-of-luck actor Sam who is stuck answering phones in the dingy basement of Manhattan's hottest restaurant du jour, must have felt very New York. Not least with it being American actor Mark Setlock — who was involved in the off-Broadway original — who took to the stage. 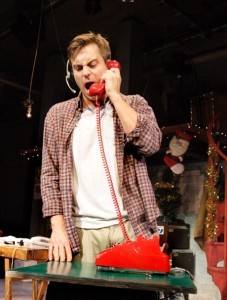 Fast forward to 2014 and Setlock has transitioned into the role of director, putting homegrown talent Kevin Bishop in the limelight. And at a time when it’s probably easier to get into the Secret Service than it is Marylebone’s Chiltern Firehouse if you’re not a celebrity, the storyline feels incredibly relevant.

We witness wannabe diners offering bribes for tables, customers being bumped to make way for celebs, the egotistical chef throwing many a wobbly and staff panicking as critics arrive, while learning just enough about Sam to genuinely care about him.

Highlights include Naomi Campbell’s coke-guzzling agent requesting a vegan tasting menu for 15 along with dimmer light bulbs and strictly no female waiting staff; a blocked toilet; and an unsuspecting visit from critic couple Mr and Mrs Zagat. It’s exaggerative, but we don’t doubt based on quite a lot of truth.

For the play’s 70 minute duration, Bishop switches between characters and jokes at an awe-inspiring pace. In fact he has to pause on a few occasions just to let the laughter die down.

It’s fair to say the show is more about punchlines than plot, but writer Becky Mode ensures that it rounds off — as any meal should — with a satisfyingly sweet finish.

Fully Committed is an unashamedly lighthearted but carefully cooked-up production of the kind which puts worthy starched white tablecloth style shows in their place. It’s Sunday roast theatre, and what could be better than that?

Fully Committed is on at Menier Chocolate Factory until 15 November. Tickets £29.50-£32.50. Londonist saw the play on a complimentary ticket.