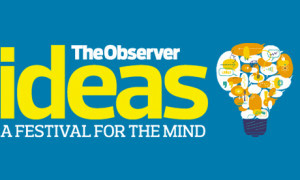 Battle of Ideas, TEDx, Lost Lectures, Intelligence Squared...there's no shortage of brainy talk events around town. Into this cerebral circuit comes Observer Ideas, a one-day festival of thinking at the Barbican.

Launched by Guardian News & Media, the event draws on the smarts of key players from the arts, media, science and activism. Let's pluck a few of their names from the programme by way of illustration. There's space scientist Maggie Aderin-Pocock on why her field is still dominated by the 'male and pale'. Inflatable Stonehenge artist Jeremy Deller will also drop by. Meanwhile, African mushroom cultivator Chido Govera talks fungal empowerment. Then Fields Medal-winning and uncanny Doctor-Who-Alike mathematician Cedric Villani reveals the romance of numbers. More besides.

Talks are kept short and punchy to keep things moving. Book your ticket now from £65.