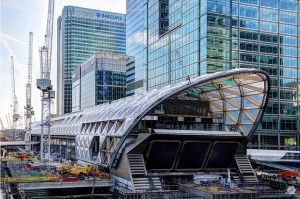 London Mayor Boris Johnson released his Infrastructure Plan 2050 earlier this week, setting out what the capital needs over the next half century. And that £1.3trn includes £200bn of transport infrastructure spending.

As it happens, much of what's in the plan isn't that new — east London river crossings and inner orbital road tunnels have certainly popped up before now — but we took a look at a few of the main areas and what's been written about them.

We wrote about the possible routes for a Bakerloo line extension to improve coverage in south London, the favoured one appearing to be Elephant and Castle via New Cross and Lewisham to Catford and Beckenham Junction.

CityMetric has come up with a rather good map of the proposed orbital rail link, which would connect some existing lines to the Overground Network. Apparently dubbed the R25 by City Hall, the Mayor believes it will make Barking 'Piccadilly Circus here in 100 years' time'.

Crossrail 2 should be built by 2030 to ease expected congestion on Crossrail 1, with extra future Crossrails in the pipeline. TfL has just finished a second consultation on the Crossrail 2 route after changing it in June following the first consultation.

Tube travellers will be delighted to learn that air conditioning is also on the plan at a cost of £900m, which means that there are possibly only another few years that articles about the tube being hotter than the legal limit for livestock can be recycled.

Needless to say, the Thames Estuary airport made it into the plan, despite it looking increasingly unlikely to become a reality. TfL recent spent £90,000 on plans for what would happen to Heathrow if the airport did move. If, by some miracle, the Estuary airport ever does become a goer, it would be supported by a high speed link into central London, a Crossrail extension between Abbey Wood and Ebbsfleet, and additional road connections costing an extra £19bn. As all this is expected to be in place by 2019, we think Boris might need to get his skates on.

As we mentioned already, bridges and other river crossings have been on and off the menu about as many times as Boris Island over the last few years. The latest round of consultations was launched in July. The 2050 plan proposes bridges from Belvedere to Rainham, Gallions Reach to Thamesmead, and one between Woolwich and Royal Docks instead of the Woolwich Ferry and the hotly-opposed Silvertown Tunnel.

Plans for an orbital underground ring road were released back in May, which would relieve congestion around Tower Bridge and Old Street, as well as the Old Kent Road, the A40 around Acton and the A503 at Woodberry Down. In common with the river crossings, it's highly likely that an orbital tunnel would be tolled.

Interestingly, the 2050 plan vaguely discusses cost-savings made by having driverless buses but a spokesman for the Mayor's office has now denied that there are plans to do this.

Along with everyone else, we've regularly covered the chronic housing shortage in London, but it's estimated that a further 50,000 new homes a year must be provided to meet demand. The plan calls for increasing density in town centres and areas with good transport provision, growth in areas outside London, and suburban housing. Better use of brownfield and green belt land has already been mooted this year. But statistics released in July suggest that Boris Johnson will miss his target to build 55,000 affordable homes by 2015, which makes us slightly skeptical that delivering an extra 1.3m homes by 2050 will be manageable either.

Also on the plan are demands for energy, water, a need for 600 new schools, improved green spaces, a 5G network and waste management.

All this lovely infrastructure will be vital if London's population does indeed increase by 37% to 11m by 2050. CityAM has produced some useful charts to show how that £1.3trn needs to be spent to achieve the Mayor's vision for the city. Boris Johnson said:

“This plan is a real wake up call to the stark needs that face London over the next half century. Infrastructure underpins everything we do and we all use it every day. Without a long term plan for investment and the political will to implement it this city will falter. Londoners need to know they will get the homes, water, energy, schools, transport, digital connectivity and better quality of life that they expect.”

You can read the plan here, or look at a nice presentation which also contains a rather lovely map of languages most commonly spoken by area of London (it's French). If you happen to be reading this in 2050, Diamond Geezer has put together a handy timeline so you can see which of the Mayor's projects were completed on time (or at all).

Photo by Bill Green in the Londonist Flickr pool.